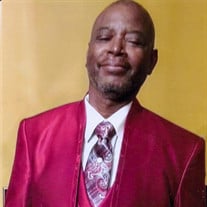 “I have fought a good fight, I have finished my course, I have kept the faith; henceforth there is laid up for me a crown of righteousness, which the Lord, the righteous judge, shall give me at that day: and not to me only, but unto all them also that love his appearing.” God gently closed the eyes of our beloved Pastor Hamilton and carried him home on July 21, 2021 at his home. Pastor Winfred Earl Hamilton was born August 25, 1956 to Sabra Hamilton of Aurora, NC and the late William Obie Jones Sr. Pastor Hamilton became the pastor of St. Monica Missionary Baptist Church of Grimesland, NC in 2018 and remained until his death. He loved preaching and ministering to his members. Under his ministry there he established a Food Outreach Ministry and a supporter of the Men’s Fellowship Choirs. These choirs included six different churches and denominations coming together every other month to sing the Gospel. Pastor Hamilton also pastored at St. John Missionary Baptist Church, Aurora, NC for fifteen (15) years. He was a member of the New Bern Eastern Missionary Baptist Association Executive Board as well as holding the office of Vice President of the Beaufort/Pitt Union. Pastor Hamilton retired from Nutrient Phosphate in Aurora, NC as an A Operator after 44 years of service. His was a Pittsburgh Steeler fan and loved traveling. He is leaves to cherish many wonderful memories, his loving wife of 33 years, Velma Jones Hamilton of the home; one daughter Sheena Hamilton, of Greensboro, NC, one son, Mark Hamilton of Los Angeles, California and one stepson, Ronnell Jones of Clinton, NC; his mother, Sabra Lee Hamilton of Aurora, NC, grandchildren; Darius Keande, RJ Brian, Jakiya, Riley, Roan, Christian, Shaiera, Keyasia, Kamden and Cadence; one sister, Minister Jennifer Cannon (Minister Bradley Cannon of Aurora, NC, seven brothers; Roger Hamilton and Deacon Stee Hamilton (Veronica) of Aurora, NC, Deacon Steve Hamilton (Chawanda) of Wilson, NC, Lawrence Hamilton (Selena) of Enterprise, Al., Victor Jones of Jacksonville, Fl., George Jones of Atlanta, Ga. and William Murphy of Havelock, NC; five aunts, Ethel Guion, Elder Eula Mattocks, Dorothy Dixon of Aurora NC, Velma Jones and Elaine Jones Driggers; Godchildren, Marcell Marshall and Nyah Roberson, mother-in-law, Hazel Marshall; brothers-in-law, Jerry Marshall, Bruce Marshall, George Marshall and Almire and sister-in-law Helen Roberison; special friends in heart Aunt Eloise Jones and Deacon Barr and his wife Betty, Mother Crandall, Mother Tyre and St. Monica Church; a host of nieces, nephews and cousins.

&#8220;I have fought a good fight, I have finished my course, I have kept the faith; henceforth there is laid up for me a crown of righteousness, which the Lord, the righteous judge, shall give me at that day: and not to me only, but unto all... View Obituary & Service Information

The family of Pastor Winfred Earl Hamilton created this Life Tributes page to make it easy to share your memories.

“I have fought a good fight, I have finished my course, I have...

Send flowers to the Hamilton family.