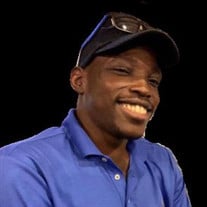 Wilson “Boo” Earl Jones, son of Winston and Margie Jones was born May 1, 1983 in Washington, DC. He departed this life on Thursday, August 20, 2020 at George Washington Hospital, Washington, DC. Wilson was educated in the Orange Rd. Elementary, Lord Baltimore Middle School and graduated with High School Diploma from Friendly High School all in Oxon Hill, Maryland. Wilson worked as a work study student at the Library of Congress after graduation and later was hired full time as a Clerk. Under President Bush administration the Federal Worker program was cut which eliminated Wilson position. After this, he was employed by Safeway Food Store. Wilson was diagnosed with sickle cell which interfered with his ability to continue working. Wilson was brought up in the True Gospel Tabernacle Baptist Church where he accepted the Lord Jesus Christ and was baptized. He served as a junior usher and served in the choir under the direction of Rev. Marvin Battle. He loved singing in the choir and playing the bongos. Wilson was loved and respected by those who knew him; he had a contagious smile that would light up a room. He really enjoyed spending quality time with his Dad and Uncle Ephriam. His hobbies included playing little league football and basketball. When his Dad and Uncle Ephriam attended his games, he would really show out!! He also enjoyed watching cooking shows even though he didn’t cook and as he grew older, he enjoyed traveling. Wilson was preceded in death by a sister, Inez; both paternal and maternal grandparents. Wilson leaves a life of love and legacy to his father and mother: Winston and Margie Jones of Dudley , NC , one sister, Shvonne Taylor; two brothers, Winston Jr, and Timothy Taylor of Goldsboro, NC; three nieces, Makita, Treshur, Joslyan; one nephew, Maurice; four uncles, Robert Jones (Joyce), Roger Jones, Andrew Jones (Carolyn), Mack Jones, two aunts, Sarah Barcous and Shirley Ruffin; three special friends , Taneisha his companion, Marquette and Charles all from Washington, DC; a host of other relatives and friends.

Wilson &#8220;Boo&#8221; Earl Jones, son of Winston and Margie Jones was born May 1, 1983 in Washington, DC. He departed this life on Thursday, August 20, 2020 at George Washington Hospital, Washington, DC. Wilson was educated in the Orange... View Obituary & Service Information

The family of Mr. Wilson Earl Jones created this Life Tributes page to make it easy to share your memories.

Send flowers to the Jones family.