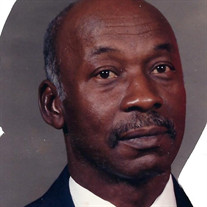 “Most assuredly, I say unto you, He that hearth My word, and believeth On him that sent Me, shall not come into condemnation: but shall pass from death unto life” John 5:24 (NIV) Such scriptures are most appropriate and descriptive of our beloved; Brother Willie Clifton Burrus was born in the Ponzer Community of Hyde County on July 26, 1940. He was the youngest son of the late Zack Burrus and the late Elsie Hooker Burrus. Willie attended the former Belhaven High School in Belhaven, North Carolina. At an early age, he relocated north for gainful employment. In 1974, Willie returned home and was employed at former Pungo District Hospital. In 1977, Willie moved with his family to Chocowinity, North Carolina. While there he was employed with the city of Washington Sewer Department. The Christian Influence of his home was encouragement for him to become a member of St. John Church of Christ Disciples of Christ at the age of nine years old. Willie served faithfully on the Board of Trustees and the Choir. Thus continuing to serve the Lord in 1981 he became affiliated with Mt. Hebron Church of Christ Disciples of Christ. Willie continued to serve on the Board of Trustees for several years. He served in Choir #1 until his accident in 1997 and remained faithful in his stewardship to God. Willie was one of jovial character. He loved helping people in all walks of life. Willie was preceded in death by his brothers, Zack Winfred Burrus on December 31, 2018. On Friday, February 22, 2019, our beloved brother, Willie Clifton Burrus, graciously answered “The Call of the Master” to a place of peace and rest. Forever cherishing his memory, are his siblings, Lorenzo King (Michelle) of Baltimore, MD and Patricia Burrus Williams of the home; surrogate siblings, Florence Lodge, Cecelia Wilkerson, Mima S. Dixon all of Washington, NC, Arneice Windley of Chocowinity, NC, Mary Clark, Modesteen C. Boomer (Booker T), Linda Clark, Valerie C. Branch (Steve) all of Raleigh, NC, Theresa C. Holloway of Sumter, SC, Janice C. White (Kenneth) of Greensboro, NC, Ronald Clark (Lillie) and Tony B. Clark (Glenda) all of Raleigh, NC; numerous loving and devoted nieces and nephews spanning three generations; devoted friends, William E. Nelson of Washington, NC, The Watson Family and The Green Family of the Leechville Community; a host of loving cousins, other relatives and friends.

&#8220;Most assuredly, I say unto you, He that hearth My word, and believeth On him that sent Me, shall not come into condemnation: but shall pass from death unto life&#8221; John... View Obituary & Service Information

The family of Mr. Willie Clifton Burrus created this Life Tributes page to make it easy to share your memories.

“Most assuredly, I say unto you, He that hearth My word, and...

Send flowers to the Burrus family.