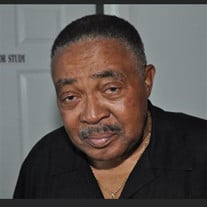 William McKinley Teel’s earthly journey began on October 16, 1947 and came to an end on Wednesday, November 4, 2020. Affectionately called “Bobby” by his family and friends, he became the third of seven children gifted to the late William Earl and Gladiola Harding Teel in Greenville, North Carolina. Bobby received his early spiritual training at York Memorial A. M. E. Zion Church, of which he was a member. His early education was obtained at Sadie Salter Elementary school and later, his beloved C. M. Eppes High School, graduating with the class of 1965. During his high school years, he served as statistician for sporting events, participated in the Student Government Association, and was a trumpeter for The Marching Bulldogs Band. “Bobby was a consistent ardent worker.” To earn money for school, he primed tobacco in rural Pitt County, worked at O’Berry Medical Center in Goldsboro, North Carolina, and spent summers laboring in Queens and Long Island, New York. After graduation, Bobby matriculated at Shaw University in Raleigh, North Carolina. Along with his academic achievements as a member of the National Honor Society and Who’s Who in American Colleges and Universities, he is remembered by Shaw University Alumni as “Lone Dog”, the only pledge out of 13 to complete the process and join the Delta Psi Chapter of Omega Psi Phi Fraternity, Incorporated in 1967. Graduating with honors, he received the Bachelor of Science degree in Business Administration in 1969. Bobby also completed additional post graduate school studies at the University of North Carolina. Bobby’s professional career began at DuPont, the world’s largest chemical company, in Kinston, North Carolina, accepting a position that had been offered to him during his junior year at Shaw University. Known as “Bill” by his DuPont colleagues, his 35 years of service included positions as member of industrial engineering team, safety supervisor, asbestos specialist, and contract coordinator. Bobby received numerous awards from DuPont noting his commitment to excellence, stelar leadership and his expertise in engineering. In additional to his professional career, Bobby served on the Pitt County Board of Education, the Global Transpark Commission board, which was instrumental in planning the 500 acre, multi-modal industrial/airport site in Eastern North Carolina, and the North Carolina Alcoholic Beverage Control Commission (NC ABC Commission). An avid volunteer and advocate for his community, Bobby was an active member of the Pitt County Chapter of Shaw University NAA, C.M Epps Alumni Association and the Nu Alpha Chapter of Omega Psi Phi Fraternity, Inc. Because of his experience and wisdom, he was a willing mentor to many of his fraternity brothers. Along with dedicated viewing of his “westerns”, Bobby enjoyed entertaining others and was touted for his culinary skills, particularly, his masterful grilling. He is especially remembered for his math skills, which he willingly shared with those needing assistance, even if it meant staying up all night and completing a test that he administered. He never missed an opportunity to talk about his children, grandchildren, nieces, and nephews. Giving of himself tirelessly, Bobby’s devotion and love for his family was surpassed only by his love for the “Master.” A consummate motivator, surrogate father, confidant, loyal friend, and mentor, his zest for life, straight tough talk, no-nonsense countenance, and sage advice contributed to successes and victories that changed the lives of many. Some of his favorite sayings include: “Don’t complain of the smoke when you jump in the chimney.”, “You can’t take love to buy food at Piggly Wiggly.”, “Sometimes you can be right at the wrong time”, and “You can buy them books, you can send them to school and they will eat the teacher”. However, the most memorable quotes he would say to his children, “Don’t say goodbye, say see you later” and “If anything happens to me, you all need to stick together.” And for his daughter Tressa, his main piece of advice was “I need to prepare you for the day when I am no longer here.” Bobby was preceded in death by his first wife, Brenda H. Teel; parents, William Earl and Gladiola Teel; brothers, Leon, Benjamin, and Dwayne; sister, Sheena and grandmother, Christine Blount. Bobby leaves to cherish his memory and legacy his wife of fourteen years, Kimberly Williams Teel; children, Steve Watts (Mother: Barbara Watts Green) of Greenville, NC, Gregory Murphy (Yolanda Murphy), (Mother: Helen Joyce Murphy) of Norfolk, VA, Terrence C. Teel (Dr. Dion Young) of Lanham MD, William Timothy Aaron Teel (Dr. Nickole Teel) of Spartanburg, SC, Tressa D. Teel (Dwight Shepard) of Greenville, NC (Mother: Brenda H. Teel), Kimpa Williams (Joe Stallings) of Raleigh, NC; Keon Williams, (Tasha Barnes) of Raleigh, NC, and Kendrecus Williams of Chicago, IL (Mother: Kimberly Williams); grandchildren, Shamirah Watts, Seedra Tyson, Dominique Grimes, Tre-Von Duguid, Ashley Wooten, Terrence Gregory Murphy, Chandler Murphy Qi-asia Murphey, Skylar Teel, Camden Teel, McKinley Teel, Kemarion Williams, Keoni Williams, and Karmyn Stallings; great grandsons, Jaylen and Mason; sisters, Dr. Sheila Teel Robinson of Greensboro, NC and Nekita D. Teel of Charlotte, NC; brother, J. DeMeatrious Teel (Anita Dixon) of Winterville, NC; sister and brother-in-law Martha Hall (Larry Hall), Gloria Graham, Teresa William of Kinston, NC, Sheila Walker of Queens, NY, Regina Wiliams of Florida, James Williams of Kinston, NC, Paul Williams of Charlotte, NC, Lamont Wiliams (Karen Williams) of NJ; aunt, Barbara Jean Taft of Greenville, NC; special cousin, James Cherry, who helped care for him during the time of his illness, along with a plethora of nieces, nephews, and cousins, including extended family of the Chapmans, Griffins, Graves, Harding, Hills, Phillips St. Clairs, Harris, Blounts and Williams; he also leaves his lifelong comrades, “Greenville’s Finest” Ben Dudley, Robert White, Billy Bryant, Charles Sayles, and Dr. Tommy Harris.

William McKinley Teel&#8217;s earthly journey began on October 16, 1947 and came to an end on Wednesday, November 4, 2020. Affectionately called &#8220;Bobby&#8221; by his family and friends, he became the third of seven children gifted to the... View Obituary & Service Information

The family of Mr. William "Bobby" Teel created this Life Tributes page to make it easy to share your memories.

Send flowers to the Teel family.