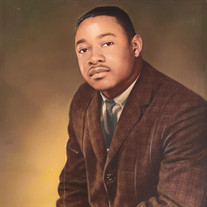 Bill was born September 29, 1940 in Halifax County, North Carolina to the late Pattie Hilliard and David Evans. In an act of love, bravery and selflessness, Bill was placed in the care of his uncle and aunt, Tommie and Mary Hilliard. Although it would appear that Bill had separate families, he dedicated his life to bridging the gaps through love. He entered eternal rest peacefully on Sunday, September 12, 2021. In 1958, Bill graduated from Oak City High School in Martin County, North Carolina. He moved to Newark, New Jersey in 1959, where he resided with his father David, his mother Nannie, and his siblings. He landed a job at Deluxe Toy Factory. There he met the love of his life, Archer (Mae) Liggins, with a little help from a few friends. They were married in 1963 and enjoyed fifty-eight beautiful years of life, love, and laughter. From this union two children were born, Yulanda Trevor and Baron Lerone. After many years of employment at ABC Baling Wire in Weehawken and the US Postal Service, Bill retired and relocated back to Greenville, North Carolina with Mae. They both joined Greenville Christian Community Center and became active, flourishing members. Bill was a sports lover...a Pittsburgh Steelers and Serena Williams devotee until the end! He loved to bowl and was active in leagues in both New Jersey and North Carolina. He was known for his love for basketball but could also be found donned in his Senior Games t-shirt playing softball, shuffleboard, track, shot putt or bocce ball. If you were looking for a partner in Spades or Bid Whist, Bill was your guy. He was everyone's "Uncle Bill" and always seemed to have exactly what you needed when you needed it...whether it was a place to stay, a word of encouragement, or a "dap" to remind you that you weren't alone. Bill was an amazing husband, father, son, uncle, nephew, cousin and friend. He was also the partner you wanted on the dance floor. Bill was preceded in death by five sisters and three brothers, Ruth Mae Hilliard, Hattie Eddy, Velbertha Whitaker, Anna Mae Brooks, Barbara Sanders, Johnny Mack Ridley, David Hilliard, and Josephicus Evans. Those left to cherish his memories, celebrate his life, and continue his legacy of love are his devoted wife, Mae; daughter, Yulanda (Bruce); son, Baron (Erika); granddaughter, Taylor; bonus granddaughter, Tiara; three sisters;Mamie Chisolm (Odell), Bettye Carson, and Mary Ridley, three brothers; Paul Ridley, Curtis Shields (Doris), and James Evans, Jr (Sara); brother-in-laws: Odell Chisolm, James Liggins, Jr. and Eddie Ray Liggins (deceased),sister-in-laws: Doris Shields, Sara Evans, Alice McGloster, Melba Liggins, and Charity Liggins. Bill also leaves to cherish his memories a host of aunts, uncles, nieces, nephews, great nieces, great nephews, cousins, other relatives, and friends who have become family.

Bill was born September 29, 1940 in Halifax County, North Carolina to the late Pattie Hilliard and David Evans. In an act of love, bravery and selflessness, Bill was placed in the care of his uncle and aunt, Tommie and Mary Hilliard. Although... View Obituary & Service Information

The family of Mr. William Hilliard created this Life Tributes page to make it easy to share your memories.

Send flowers to the Hilliard family.