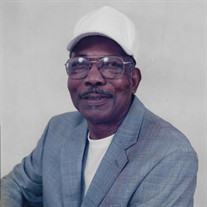 On Friday, August 06, 2021, William “Jack” Andrews, peacefully transitioned into his eternal rest at his home. “Jack,” as he was affectionately called by those who loved and knew him, was born August 14, 1939 to the late Elnora Coffield and Ben Andrews. He received his formal education in Nash and Martin County Schools, and graduated from East End High School in Robersonville, NC. During his early years, Jack worked on the farm alongside his family, but eventually gained employment at West Point Pepperell Textiles where he served as a foreman for thirty-nine years. During his time at West Point, he was known as “The King”, the problem solver, because he could solve almost all of the issues that arose in his department. After leaving West Point, he was employed by Lowe’s for eleven years, and retired shortly thereafter. Being a “creature of habit,” Jack loved watching old western movies, Wheel of Fortune and Family Feud. He was a self-taught carpenter, and spent many hours enjoying his craftmanship. Jack’s love for his family was beyond any comparison. His loving and devoted wife of twenty-six years acknowledges his compassion, honesty, forthrightness, willingness to do for others, and his passion to willingly instruct others on how to improve their lives. We have truly lost a good fighter! Jack’s departure is mourned by his wife, Charlotte Andrews; his daughters, Shelby Hopkins of Greenville, NC, Annie Marie Williams (Richard) of Williamston, NC, Tamira Hassell (Cecil) of Greensboro, NC, ChaKeisha Andrews of Hassell, NC and Jacqueline Baker (Cornelius) of Raleigh, NC; a son, William “Boo Boo” Andrews of Wake Forest, NC; a brother, Lester Andrews (Kimberly) of Alexandria, VA; thirty grandchildren; forty-two great grandchildren; one great-great grandchild; a host of nieces, nephews, cousins, and many, many friends.

The family of Mr. William Andrews created this Life Tributes page to make it easy to share your memories.