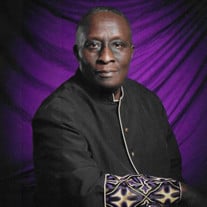 For the preaching of the cross is to them that perish foolishness; but unto us which are saved it is the power of God. KJV 1 Cor. 1:18 Chief Apostle Warren C. Williams was born on October 18, 1956 in Grimesland, NC, to the late Joseph and Kadell (née Harvey) Williams. On Thursday, June 10, 2021, Warren transitioned from this earth to his final rest in glory. Warren received his primary education from Pitt County Schools, graduating from D. H. Conley HS in 1976. After graduating high school, he attended Pitt Community College for 2 years, where he studied to become a machinist. Shortly thereafter, he was employed by Vermont American Corporation, where he worked for 22 years before his retirement. He later worked for Pitt County Schools, serving as a bus driver and substitute teacher. Warren was a born-again believer and served God fervently by simply being a servant of others. In 1976, he gave his life to the Lord and became a member of First Born Holy Church of Grimesland, NC, under the leadership of the late Bishop J. L. Smith. He served there as a brother, steward and an elder, until 1991, when the Lord called him to the role of Pastorship; he then founded Faith and Deliverance Pentecostal Holiness Church, where he served as its faithful & fearless leader for 30 years, and was later ordained as Bishop in 2006, and then Chief Apostle of Faith and Deliverance Pentecostal Holiness Church- A Pentecostal Assembly of God Ministry in 2015. Warren was a wonderful man of God, leaving an indelible mark on those he met wherever he went. He loved people, loved being a servant of God and preaching God’s word, and was always working to fulfill God’s most important call - to lead people to Christ. Anyone who knew him knew that his favorite saying was “THIS GOSPEL MUST BE PREACHED!!” He would always leave those whose paths he crossed with the “three F’s” - Faith, Family & Finances; he firmly believed that as long as you kept these in order, you will make it. Warren married Julia Lee Rountree on July 23, 1976. He was a great husband and father; assuring his bride on their wedding day that “...if you stick with me, I will take care of you” - and he did just that! Warren was preceded in death by his parents, Joseph & Kadell Williams; a son, Titus Williams; two brothers, Joseph Williams Jr. & Edward Williams; and two sisters, Shirley Ann Whitaker & Clidean Acosta. Warren leaves to cherish many wonderful memories, his wife of 44 years, Pastor Julia Williams of the home; 4 sons, Quincy (Nicole) of Greensboro, NC, Cody of Greenville, NC, Anrekae of Hinesville, GA, and Melquan Williams of Oahu, HI; 3 grandchildren, Nicholas, Nathaniel and Quiana Williams; 4 brothers, Robert (Faye) of Grimesland, NC, Charles, Raymond and Clinton (Peggy) Williams all of Greenville, NC; 1 sister, Emmaline Artis (James) of Greenville, NC; 8 sisters-in-law, 5 brothers-in-law, scores of godchildren and grand-godchildren, a mega-host of nieces, nephews, cousins and friends, as well as his Faith and Deliverance PHC church family, whom he loved so much.

For the preaching of the cross is to them that perish foolishness; but unto us which are saved it is the power of God. KJV 1 Cor. 1:18 Chief Apostle Warren C. Williams was born on October 18, 1956 in Grimesland, NC, to the late Joseph and Kadell... View Obituary & Service Information

The family of Apostle Warren C. Williams created this Life Tributes page to make it easy to share your memories.

For the preaching of the cross is to them that perish foolishness;...