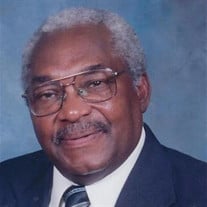 Warren Brooks Outterbridge transitioned from earthly labor to his heavenly reward on Monday, May 20, 2019 at 12 noon. He leaves a legacy of love and dedication to his family, friends and community. Warren was the third of eight children born to the late John Ivory and Olivia Outterbridge on February 14, 1935 in Greenville, NC. He was a graduate of C.M. Eppes High School Class of 1955. After graduating from high school he dedicated eight years of his life to our country by serving in the United States Air Force and Navy. On August 10, 1958, Warren married his high school sweetheart, Mary “Billie” Chase at York Memorial A.M.E. Zion Church on Albemarle Avenue. This union was blessed with three children. After his military experience, Warren moved to Washington, DC where he continued to work as a draftsman. Due to a brief illness of his mother-in-law Warren and his family returned to Greenville. After returning to Greenville, NC, he worked for Kinston’s Dupont Company for several years before accepting a position in the design department at Burroughs Wellcome. While working at Burroughs Wellcome, Warren also extended his talents by painting signs and designing logos for businesses and companies throughout the state. Warren’s numerous talents led him to start his own graphic design and sign painting business. Due to medical problems he was forced to give up his business; however, he continued to display his talents at East Carolina University until he retired. As a teenager Warren joined Sycamore Hill Missionary Baptist Church. He became an active member of the Boy Scouts under the leadership of Deacon Joshua Alexander. Warren continued to use his talents in the church when needed. Though he was not able to attend church in recent years, he continued to enjoy services by way of the church recordings and visits from church members. In addition to his parents, Warren was preceded in death by his beloved wife, Mary Evangeline “Billie” Chase Outterbridge on November 10, 2016; his sister, Ivory Wilson; brother-in-law, Frank Wilson; sister-in-law, Gloria Coker. Warren leaves to cherish his memories, one son, Anthony (Patricia) of the home; two daughters, Denise (Julius), Veronica (Randy) both of Greenville, NC; three grandsons, Curtis Outterbridge, Gregory Allen both of Durham, NC, Kevin Common of Washington, DC; one granddaughter, LaShawn Gibbs of Greenville, NC; one great-granddaughter, Jayla Phillips of Greenville, NC; one adopted-grandson, Joshua Lodge of Greenville, NC; four brothers, John (Beverly) of Los Angeles, CA, Freddie (Lillian) of Greenville, Marvin (Lorraine) of Greensboro, NC, Robert of Columbia, MD; one sister, Reverend Jackie Parks (Frederick) of Goldsboro, NC; a host of nieces, nephews, other relatives and friends. In lieu of flowers Contributions may be made to the Sycamore Hill Gateway Plaza in memory of the deceased, Warren B. Outterbridge.

Warren Brooks Outterbridge transitioned from earthly labor to his heavenly reward on Monday, May 20, 2019 at 12 noon. He leaves a legacy of love and dedication to his family, friends and community. Warren was the third of eight children born... View Obituary & Service Information

The family of Mr. Warren Outterbridge created this Life Tributes page to make it easy to share your memories.

Send flowers to the Outterbridge family.