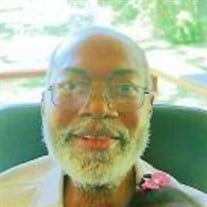 Walter Lee Shepherd was born on March 7, 1946 to the late Charlie Shepherd and Ernestine Whitehead Shepherd in Robersonville, Martin County, North Carolina. Walter Lee Shepherd passed away peacefully in his home on April 18, 2021 after complications from a radioactive spider bite that led to years of crime-fighting and a 10+ yearlong battle with a nefarious criminal syndicate called A.L.S. (Amyotrophic lateral sclerosis), who has plagued our society for far too long. Civilians will recognize him best as The Black Spider-man and thank him for his many years of service protecting our city. His family known him best for being a mild-mannered General Motors employee of 30 years, and family man of 50 years. Moving from Robersonville, NC to Brooklyn NY. Walter meets his Superhero partner in crime Joan Pamela Lynch (The Iron Woman) hailing from Mckenzie, Guyana South America. From there, Walter & Joan continued their dynamic duo crime fighting spree from Brooklyn NY to Syracuse NY with their 1st born son, Leslie Shepherd. While in Syracuse, NY Walter was hired as a General Motors Employee. Walter & Joan was married August 1, 1970. Expanded their family tree with the first daughter, Joanett Shepherd and their last son, Walter Shepherd, Jr. Once the family unit was complete Walter expanded his crime fighting reach from Syracuse NY, to Baltimore MD. After 30 year of hiding his secret identity from the public Walter finally retires from General Motors in Baltimore, MD to move back home to his roots of Robersonville, N.C. This is where Walter & Joan would engage in the most epic 10+ battle against the criminal gang A.L.S. • He is survived by his wife and lifelong superhero partner of 50 years, Joan Pamela Shepherd of Robersonville, NC. • 2 sons, Leslie Shepherd of Robersonville, NC. & Walter Shepherd, Jr. of Atlanta, GA. • 1 daughter, Joanett Shepherd of Robersonville, NC. • 1 granddaughter, Zuzannah Shepherd of Atlanta, GA Even though this obituary may seem unconventional, Walter Lee Shepherd was a real-life superhero in the hearts of his family. Mostly known for his 50-year marriage team-up to Joan P. Shepherd. His lifestyle portraying the motto of; never shy away from responsible, always doing your best, and family can always come home. With Great Power Comes Great Responsibility, With Great Responsibility comes Great Decisions With Great Decisions forges a Great Person With a Great Person must lead a Great Family 'The Genuine' Walter Lee Shepherd

The family of Mr. Walter Lee Shepherd created this Life Tributes page to make it easy to share your memories.

Send flowers to the Shepherd family.