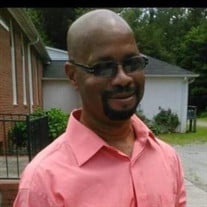 Wallace Tee Brown was born on June 14, 1967 to the late Alton &#8220;Tim&#8221; Brown and the late Mattie Mae Brown in Pitt County. He departed this life on Tuesday, September 22, 2020. Wallace was educated in Pitt County Schools and graduated... View Obituary & Service Information

The family of Mr. Wallace Tee Brown created this Life Tributes page to make it easy to share your memories.