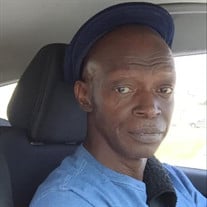 Wade Hamilton Woods, Sr was born on December 23, 1951 in Bunnell, FL to the late Edith and Henry Woods, Sr. He was the sixth of fourteen children born of that union. Wade spent the early years of his life playing in the fields of Bunnell, FL, and was an energetic and inquisitive child. Wade begun school and was educated in the Vermont Heights School District, Vermont Heights, FL. He excelled in Grammars and was a champion speller, he often won The Spelling Bee. At home, Wade took his place in the family’s hierarchy. He successfully completed all his chores by collaborating with his younger siblings. In pursuit of a better life, his father moved the family from Florida to New York. While in New York, Wade attended several different elementary schools due to The Civil Unrest of that time. Wade was loquacious, he tended to talk a great deal. He would tell a story and act out all the parts if you let him. He had, “The Gift of Gab.” Wade loved people, talking with people, laughing at people and most importantly, he loved helping people. Wade received and accepted the call of Lord to preach His Words. He would study The Bible regularly and search through its words as if looking for hidden treasure. Wade often studied with his younger brother Louis who was also called by God. They referred to their study as “Iron Sharpening Iron.” Wade attained his Baccalaureate of Divinity Degree from the ABC Bible College, New York. Wade was employed at Pilgrim Psychiatric Center Brentwood, New York, where he met and fell head over heels, in love with “his rib” and the love of his life, Linda. They were married February 14, 1991 and shared thirty-one years of marital bliss. While in New York he attended New Light Baptist Church, Lindenhurst, NY where he was a minister and teacher until 2013 when he moved to North Carolina. Due to physical health challenges, Wade retired from Pilgrim. Not long after that, Wade, Linda and his daughter, Lori moved from Bayshore, NY to Greenville, NC. While in Greenville and after surveying the land, Wade found his church home at St. Mary Missionary Baptist Church. There he served in various capacities: preacher, teacher, and choir member to name a few. Wade worked in The Lord’s vineyard until The Lord called him from labor to reward on the morning of December 27, 2021. Wade was preceded in death by his parents, Edith and Henry Woods, Sr; his brothers, Henry A “Sonny” Woods, Jr, Isaac P Woods, Earl B Woods, Freddie L. Woods, Norman Woods and Louis Woods. Wade leaves to mourn his passing, his wife, Linda Woods; his daughter, Lori Woods both of Greenville, NC; his son, Wade H Woods, Jr of Colorado Springs, CO; his brothers, Joseph Woods (Rosemary) of Islip, NY, Lenton Woods (Sharone) of Coram, NY, Troy W. Woods of Fayetteville, NC and R. Kenny Woods (Renee’) of Riverview, FL; his sisters, Margaret L. Woods Williams of Orlando, FL and baby sister, Olivia V. Woods Herring of Newport News, VA; a host of grandchildren, nieces, nephews, cousins, friends and associates.

Wade Hamilton Woods, Sr was born on December 23, 1951 in Bunnell, FL to the late Edith and Henry Woods, Sr. He was the sixth of fourteen children born of that union. Wade spent the early years of his life playing in the fields of Bunnell,... View Obituary & Service Information

Send flowers to the Woods family.