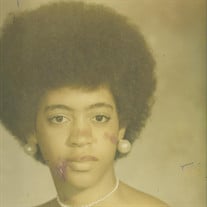 Due to COVID-19 restrictions, mandated by Governor Roy Copper the funeral of Ms. Villa Teel Andrews will be by invitation only. Villia’s Favorite Scripture: “I can do all things through Christ who strengthens me.” Philippians 4:13 On July 5, 1954, a baby girl was born to William Augusta and Mary Teel of Everetts, NC. They named her Villia Sharon Teel. Her mom was 40 years of age when she was born, and that is why she said she was different from her seven other siblings. She was a feisty little thing and she began walking at the age of seven months old. Villia graduated from Robersonville High School, class of 1972. There she created cherished friendships and treasured memories. Some of her best times were being crowned as Homecoming Queen and being part of a modern dance group under the leadership of Georgianna Barnes. After high school, Villia went to college and graduated from Saint Augustine’s University, Raleigh, NC with a degree in Early Childhood Education. After college, she got married and went with her husband and begin her military experiences. She lived in several places such as Georgia, North Dakota and Japan, where she worked in the Japanese School System until she decided to pursue her master’s degree from the University of Southern California, which she did. After deciding to come back home, she worked in the Martin County School System for sixteen years until her health started to take a turn. She was the first to receive robot hip surgery in the state of North Carolina. Her surgery was successful, and her story was televised. Villia’s Christian ties is the House of Refuge Church Ministries under the leadership of Overseer Ronnie and Pastor Angel Staton, whom she loved dearly. When she was active in church, she served on the Usher Board at Lily of the Valley Church before moving to House of Refuge. For the remaining years, her health begins to decline. It was from one thing to another. Villia fought a good fight. Her doctors and nurses loved her from hospital to hospital, they said she was toughest they had ever seen with the pain she endured. On the end she said her life was in the hands of the Lord and she refused anymore treatments. She trusted God. Villia was loved by so many. She never had biological children but had a community of children who loved her, and she loved them. She had an hand in helping to rear many of her nieces and nephews and they loved her dearly. Gentle, loving, generous and lively are only a few words to describe Vil. She was called “Aunt Vil” by many children. Vil was a giver and would give her last dime to anyone in need. She perfected the role of a sister, aunt and friend. Vil will be missed. She was an angel on earth and now an angel in heaven. May her beautiful soul rest in peace. Villia is preceded in death by her sister, Huta; two brothers, William Russell and Bobby Teel. Villia leaves to cherish her memories two sisters, Valerie Teel Joyner of Everetts, NC, Bertha Teel of Williamston, NC whom she lived with and referred to her as mom; two brothers, Larry Teel of Everetts, NC and James Teel of Lynchburg, VA; one foster child she nurtured and cared for from the age of two until his teenage years, Kenneth Mallory, Jr of Raleigh, NC; a host of nieces, nephews, cousins, other relatives and friends.

Due to COVID-19 restrictions, mandated by Governor Roy Copper the funeral of Ms. Villa Teel Andrews will be by invitation only. Villia&#8217;s Favorite Scripture: &#8220;I can do all things through Christ who strengthens me.&#8221;... View Obituary & Service Information

The family of Ms. Villa Teel Andrews created this Life Tributes page to make it easy to share your memories.