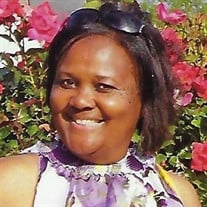 Vickie Lynn Ebron Grimes was born on November 12, 1960 to Bernice Adams Ebron and Charles Ray Ebron in Pitt County, North Carolina. She peacefully went to be with our Lord and Savior on August 29, 2019. Vickie grew up attending Sycamore Chapel Missionary Baptist Church through them and her parents she learned to love the Lord. While attending SCMBC she also sang in the choir. Vickie attended Pitt County Schools where she graduated from Junius H. Rose High School in May 1978. She joined the work force helping to educate the next generation, teaching pre-school aged children at KinderCare and A Child's Place. She later went on to work with Wahl-Coates Elementary and Chicod School. She decided to return to school and obtained her Bachelor's degree in Early Childhood Education from Mount Olive College and graduated August 29, 2009. She enjoyed gardening, cooking, spending time with family, friends and loved ones. She also loved traveling to places such as the Bahamas, Jamaica, Las Vegas, New York, in addition to other locations. Vickie's family and friends meant the world to her and they all had a special place in her heart. Later in life Vickie joined Koinonia Christian Center where her knowledge and confidence in the Lord continued to grow. She joined the Greeters Ministry where she enjoyed meeting new people. She also volunteered with KCC's other outreach ministries. Vickie is survived by her doting children, daughter Shannon Grimes of Raleigh, NC and son Michael Ryan Grimes of Raleigh, NC. She also leaves behind four sisters, Ethel Morgan of Newport News, VA and Bernell Skinner of Greenville, NC, Anita Scott of Greenville, NC and Cynthia Brown of Greenville, NC; four brothers, Charles Ebron, Jr., Carl Ebron, Jeffery Ebron all of Greenville, NC and Jerry Ebron of Wilson, NC. She acknowledges her uncles, James Adams of Hampton, VA, Leroy Adams of Baltimore, MD and aunts, Rosa Freeman of Colonial Heights, MD, Alice Jones of Washington, DC, Velma Bratton of Thomasville, NC, and Linda Adams of Greensboro, NC. She also has loving nieces, nephews, cousins and a host of relatives and friends.

Vickie Lynn Ebron Grimes was born on November 12, 1960 to Bernice Adams Ebron and Charles Ray Ebron in Pitt County, North Carolina. She peacefully went to be with our Lord and Savior on August 29, 2019. Vickie grew up attending Sycamore Chapel... View Obituary & Service Information

The family of Ms. Vickie Ebron Grimes created this Life Tributes page to make it easy to share your memories.