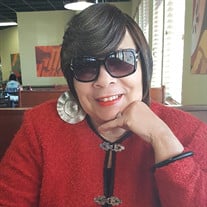 On Thursday, March 31, 1951 in Bethel, NC, the late John H. and Julia Ann Wilson welcomed the birth of a daughter into their home to live and learn to grow and to work. In this home filled with love and laughter, discipline and devotion the baby girl, whom they named Vernelle, would become curious, energetic, and caring young woman for which she would be known for the rest of her life. That curiosity and energy served Vernelle well as she matriculated through the Pitt County Schools system toward her 1969 graduation from H.B. Suggs High School, where one of her fondest memories was playing on the girls' basketball team as a point guard. And these same characteristics would follow her afterward into the world of work where she held such prominent positions as Assistant Manager of Roses Department Store and Supervisor of Pitt County Memorial Hospital Transportation System at a time when neither women or African Americans were widely considered for such responsibilities. Later Vernelle would combine her innate compassion with the talents she had gained in these fields to direct the public relations' efforts of numerous funeral homes lightening the burdens of many mourning, families even while helping businesses prosper and ultimately, as entrepreneur of Granelles Limousines Services, which she co-founded and co-owned with her partner in business, in life, and in love, Grady Gaskins, whom she married on April 6, 1983. Besides a thriving business, this union brought together two daughters, Shenilla and Starr, and one son, Darrell. In her sixty eight years of life Vernelle scripted her legacy: a starightforward, hard-working woman, who would do anything she set her mind to do. She loved her family ans was the picture of devotion as a wife, a mother, a grandmother, a sister, an aunt, a cousin and a friend. And after her grandchildren, her greatest delight was making it known that her door was always open to family and friends. In the early morning hours of Friday, March 22, 2019, in Greenville, NC, God and His Council welcomed the return of a faithful servant back home this time to rest. Left to cherish her memory are her husband Grady Gaskins; three children, Shenilla (Gary) Solomon (Fayetteville, NC), Darrell Wooten (Greenville, NC), and Starr Powell (Greenville, NC); three adorable grandchildren, Justin Solomon, Alonna Solomon, and Jovonte' Powell; three sisters, Delores (Bishop Carlton) Gay, Elaine (James) Parker, and Missionary Deborah Brown; She also leaves two God-sisters, Betty Jean House and Shirley Hunter; three God-brothers, Bishop James Tripp, Kelly Dewitt, and Thomas Wilkes; one astounding uncle, Earl Wilson; five sisters-in-law, Verna Gaskins, Mary Benekin, Gloria Dixon, Alice Wilson, Willie Carol Forbes; two brothers-in-law, Donald Forbes (Carol Forbes) and Kermit (Gloria) Dixon; four God-children, Kimberly Blount, Tamara Person, Dontario Brown, and Reverend Curtis Joyner; a devoted nephew, Andre (Cynthia) Gay; and dedicated friends, Barbara Baker, Grace Waters, Deborah Johnson, Yolonda Little, and Shelia Jones. A host of nieces, nephews, cousins and friends.

On Thursday, March 31, 1951 in Bethel, NC, the late John H. and Julia Ann Wilson welcomed the birth of a daughter into their home to live and learn to grow and to work. In this home filled with love and laughter, discipline and devotion the... View Obituary & Service Information

The family of Mrs. Vernelle Wilson Gaskins created this Life Tributes page to make it easy to share your memories.

Send flowers to the Gaskins family.