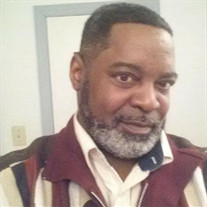 Troy Keith Modica, son of Joseph M. and Jannie A. Modica, was born on October 7, 1962. He was called home on Monday, September 16, 2019. Troy, aka “Kool-Aid and Smiley”, attended the Martin County Public Schools in Robersonville, NC. In his younger years he enjoyed singing in the choir at Roberson Baptist Church and playing the drums with the Ayden All Stars Drum Corps. He was employed with Advance Mechanics in Greenville, NC for fifteen years. Troy taught heating and air condition courses at South Central High School with the company. Troy’s personality and contagious smile attracted everyone he met. He was always willing to lend a helping hand to anyone in need. If you were feeling down, Troy knew just how to come in and say or do something crazy to make you forget all about your problems. Troy had a deep love for his family, especially his grandchildren. Everyone knew Troy was a #1 fan of the Pittsburg Steelers. Troy will be greatly missed, and hearts will be saddened; but God had a better plan for him, so he called him home. Troy was preceded in death by his parental and maternal grandparents, Essie Mae Modica and Marie Moore; one sister, Lynda J. Ampley. Troy is survived by his wife, Kejuanna Modica; his parents, Joseph and Jannie Modica; one son, Marque D. Modica (Jenifer); daughter, MyMona Moore; five grandchildren, Darius, Christian, Marque Lezan, Angela and Izaiah; father-in-law, Herman Corey, Sr.; mother-in-law, Juanita Goddard; five sisters, Cathy Wallace (Kenneth), Gail Wilson (Rondy), Debra Modica Andrews, Becky Strange (Bryan) and Lisa Modica; one cousin/brother, Michael Moore; one dedicated friend/brother, Donnell Williams; three brothers-in-law, Herman L. Corey (Jenny), Herlano Corey (Maria) and Herdetrick Corey (Cherelle); two sisters-in-law, Shaquya Coffield (Jarret) and KenJara Goddard; a host of uncles, aunts, nieces, nephews, cousins and friends.

The family of Mr. Troy Keith Modica created this Life Tributes page to make it easy to share your memories.

Troy Keith Modica, son of Joseph M. and Jannie A. Modica, was...

Send flowers to the Modica family.