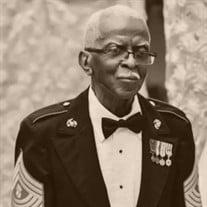 We wait in hope for the Lord: He is our help and our shield. In Him our hearts rejoice, for we trust in His holy name. May your unfailing love be with us, Lord even as we put our hope in You. Psalm 33:20-22 Thomas Roosevelt Payne, Sr. was born May 14, 1933 to the late Bishop Ethelbert and Violet Payne. He was born and raised in Boston, Massachusetts and was the eleventh of thirteen children. Our beloved made his transition to eternal rest on May 28, 2020. Thomas received his early education in the Boston Mass. School System. He graduated from English High School and later joined the Marine Corp shortly after graduating. He proudly served his country for over 30 years until retiring in 1983. He retired as a Master Gunnery Sergeant (E-9), which was the highest rank of an enlisted servicemember. It was also during this time that he was stationed in North Carolina and met his wife, Shirley. They married on April 19, 1968 and recently celebrated 52 years of marriage. Thomas was a dedicated sport enthusiast and his passion for sports evolved into him officiating sporting events in his spare time. His many years of dedicated and distinguished service garnered him much recognition and earned him several accolades within the athletic community. His most notable achievement was being inducted into the CIAA Official’s Hall of Fame in 2012. Thomas furthered his education by enrolling at Pitt Community College where he earned an Associate in Applied Science Degree in Marketing and Retailing and as Associate in Applied Science Degree in Business Administration. He was inducted into the Gamma Beta Phi Society for outstanding scholastic achievement and worthy character while attending Pitt Community College. After graduation, he accepted a job at Pitt Community College where he worked as a Tutorial Officer until retiring in 2002 due to suffering a stroke. Thomas encountered many health challenges throughout the years undergoing several operations, surgeries, and medical procedures as a result. Throughout them all, it was his faith in God that got him through. He never gave up hope that God would heal and restore him. Thomas loved the Lord and he was faithful dutiful, and dedicated servant of Cornerstone Missionary Baptist Church (CMBC). He served in kingdom building and ministry at CMBC for over 21 years in the capacity of Trustee, Usher, Sunday School Teacher, Men’s Fellowship, and Yoke Fellow Prison Ministry just to name a few. Thomas was an example of what it truly means to be a soldier for the army of the Lord. Thomas was preceded in death by his parents; three children; six sisters and four brothers. Thomas leaves to cherish his memories his devoted and loving wife, Shirley T. Payne of the home; his son, Thomas R. Payne II (Deneen) of Charlotte, NC; his one and only granddaughter, Patreece Govea (Marc) of Farmville, NC; his grandson, Kendall Dixon of Charlotte, NC; his daughter-in-law, Debra Edwards of Charlotte, NC; his brother, Eustace Payne, Sr. (Bernice) of Boston, MA; his sister, Eleanor Perryman of Atlanta, GA; sisters-in-law, Rosa Edwards of Winterville, NC Emma Prayer (Charles) of Ayden, NC, Barbara Payne of Chicago, IL; brothers-in-law, Charlie Edwards of Greenville, NC, Robert Edwards (Judith) of Greenville, NC, Jay C. Edwards of Greenville, NC; a host of nieces, nephews cousins, other relatives and friends.

We wait in hope for the Lord: He is our help and our shield. In Him our hearts rejoice, for we trust in His holy name. May your unfailing love be with us, Lord even as we put our hope in You. Psalm 33:20-22 Thomas Roosevelt Payne, Sr. was born... View Obituary & Service Information

The family of Mr. Thomas Roosevelt Payne, Sr. created this Life Tributes page to make it easy to share your memories.

We wait in hope for the Lord: He is our help and our shield....

Send flowers to the Payne, family.