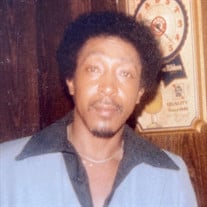 Thomas Louis Hill was the oldest child born to Thomas Hill and...

Send flowers to the Hill family.