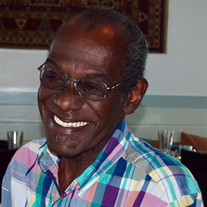 In lieu of flowers, Tom’s memory would be honored by gifts to the Alzheimer’s Association. Thomas Edward Clark was born in Washington, NC on September 26, 1949 and went to join his beloved mother in Heaven on December 21, 2019. The only child of Mary Jane Lawrence, Tom grew up in Bath and Little Washington. After tragically losing his mother during his early teens, Tom was embraced in the loving care of his grandfather “Papa”, his Uncle Albert and Aunt Della Lawrence, his aunts, Isabel, Dorothy Marie, and Mattie Elizabeth and all of the cousins he loved so dearly. Tom attended P.S. Jones High School and cherished the friendships he made there. No one was a stranger to him in Bath or Washington, NC. After graduating high school, Tom joined the Air Force in November of 1967 where he served at Plattsburgh Air Force Base in NY. He was honorably discharged in February of 1969. He never lost the military habit of shining his shoes and often made everyone late until he had them “looking right”. From the age of 10, Tom began what would be his life’s work, growing up under his mentor, Lewis Taylor Randolph, at Randolph Funeral Home in Washington, NC. After completing his military service, Tom settled in Brooklyn, NY where he worked briefly on Wall Street, followed by five years as an assistant to the forensic pathologist at Beekman Downtown Hospital. He never lost sight of his dream of being a Funeral Director and enrolled in the mortuary science program at Farmingdale, NY. After graduating and working at a variety of funeral homes in NY he opened his first funeral home in Brooklyn. Tom married Carla Dago and they had two daughters, Dana and Kara. The marriage ended in divorce in 1991. In 1990 Tom realized his dream of returning to North Carolina and moved to his beloved Bath. He opened a funeral home in Greenville followed by a funeral home in New Bern and proudly served his North Carolina families for over 25 years as a licensed funeral director. In June of 1991, Tom married Lora Graham and they moved to Greenville where they remained for 28 years. They had two daughters, Nicole MaryJane and Taylor Elizabeth. Tom and Lora had been devotedly married to each other for 28 years at the time of his passing. Tom will be remembered by all who knew him for his smile that lit up a room, his infectious laugh, and his often hysterically funny expressions. Tom loved jazz, dancing, being a licensed funeral director, eating seafood, getting dressed up, exotic cars – but most of all he loved his “girls”. Tom is survived by his four daughters and their families–– Dana Dago-Mitchell and her husband Chance Mitchell, and their three beautiful children Tanner, Hudson, and Phoebe of Croton-on-Hudson, NY; Kara Dago-Clark of Yonkers, NY; Nicole MaryJane Clark and her sweet baby Olivia Rose of Birmingham, AL; and Taylor Elizabeth Clark of Winston-Salem, NC. He was justifiably proud of all of his girls and when someone remarked how beautiful they are he always responded, “look at their Daddy”. Tom is also survived by his loving wife Lora Clark (formerly of Greenville, NC now of Birmingham, AL). Tom’s final years were marred by the immeasurable loss that is Dementia, but he never lost sight of how connected he was to his loved ones. We will miss him, but we are comforted that he is in Mary Jane’s loving arms. Until we meet again, “Preach Clark, sing Choir…”

In lieu of flowers, Tom&#8217;s memory would be honored by gifts to the Alzheimer&#8217;s Association. Thomas Edward Clark was born in Washington, NC on September 26, 1949 and went to join his beloved mother in Heaven on December 21, 2019.... View Obituary & Service Information

The family of Mr. Thomas Edward Clark created this Life Tributes page to make it easy to share your memories.

In lieu of flowers, Tom’s memory would be honored by gifts to...

Send flowers to the Clark family.