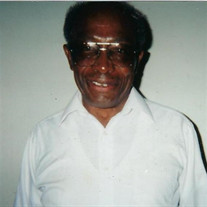 Thad Merrick, Sr. entered this world November 30, 1930 to the late Dallas and Ida McCullor Merrick. He entered rest on Tuesday, November 12, 2019 in Hampton, VA. Thad served in the Army of the United States in the Korean War, ranked as a Corporal from 1952 to 1954 and was honorably discharged. He enjoyed talking about serving in the army and the places he traveled. Thad was the oldest member of the American Legion Post #226 of Swan Quarter, NC. Thad was a member of Saint Mary Church of Christ, Disciples of Christ. In the community and by relatives Thad was known as “Little Daddy”. He was friendly,loving, and had a caring heart. Thad made sure his wife and children had the necessities as well as unnecessary things. Whatever Thad was involved in he gave it his best, whether it was being a truck driver, operating his own woodcutting business, or at home, he was diligent and devoted. Thad was united in Holy Matrimony to the late Shirley Sadler Merrick for sixty-four years. During this union they were blessed with two sons, Terry Merrick and Thad Merrick, Jr. (both deceased) and five daughters. Thad “Little Daddy” is survived by five daughters, Debra Johnson (Rodney) of Hampton, VA, Carolyn Johnson of Hampton, VA, Linda Merrick of Swan Quarter, NC, Nerissia Merrick of Durham, NC, Pam Green (Oris) of Glen Burnie, MD; extended family, Lettie Lee Mann and Richard Howard; nine grandchildren, Teneisha (Edward), Wesley, Michael, Ramon, Oris (Alicia), Kyla, Niesha, Malcom, Shirley; four great-grandchildren, Terri, Edward, Noah, Kaiden; one brother, Joseph Merrick of Connecticut; two brothers-in-law, Sammie Sadler, Jerome Blount; one sister-in-law, Emma Blount; a host of nieces, nephews, cousins, other relatives and friends. To God Be The Glory for a life well lived….We love you dearly “Little Daddy” and we will never forget your love for each of us.

Thad Merrick, Sr. entered this world November 30, 1930 to the late Dallas and Ida McCullor Merrick. He entered rest on Tuesday, November 12, 2019 in Hampton, VA. Thad served in the Army of the United States in the Korean War, ranked as a Corporal... View Obituary & Service Information

The family of Mr. Thad Merrick Sr. created this Life Tributes page to make it easy to share your memories.

Send flowers to the Merrick family.