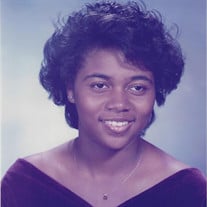 Tarsha Michelle Daniels Johnson In the early morning hours of Sunday, November 1, 2020, God sent his guiding angel to escort Tarsha Michelle Daniels Johnson to her heavenly home. Tarsha was born on January 1, 1970 in Pitt County, NC to Jesse and Margaret Diane Daniels. She was the first baby born in Pitt Memorial Hospital in 1970. She joined Hayes Chapel Missionary Baptist Church at an early age. Tarsha later served in the ministry of The Anointed Ones Church in Ayden NC. She was a 1988 graduate of North Pitt High School and went on to attend UNC-Chapel Hill. She was employed as a Hospitality Manager for Sodexo at North Carolina Central University in Durham NC and prior to that she was the Food and Beverage Director for Thompson Hospitality at Virginia State University. Tarsha was united in marriage to Eric Johnson for 24 wonderful years. She became a mother figure to many, some who lived in their home and others to whom she offered love and guidance. Tarsha was a beautiful woman with a genuine compassion for people and was loved and adored by many. During her lifetime she was affectionately called Tot, Peanut and Baby Girl. Tarsha was a loyal wife, daughter, friend and confidant with a humble and giving spirit. She would literally give the shirt off her back to anyone in need and expected nothing in return. She shared a special bond beyond measure with her younger brother Kendrick whom she referred to as KD. Tarsha was preceded in death by her maternal grandparents, Mr. & Mrs. Johnnie Daniels; her paternal grandparents, Mr. & Mrs. Warren Daniels Jr.; her mother- in- law, Ms. Reba Johnson; father- in- law Walter G Johnson II; sister- in- law, Tonya Johnson; two nephews, Quinton and Xavier Johnson. Tarsha leaves to cherish her memories, her husband, Eric Johnson of the home; her parents, Jesse and Margaret Diane Daniels of Greenville NC; her brother, Kendrick Daniels and nephew Jaden, both of Greenville NC; a special great-aunt, Maggie Grimes of Bethel NC; two brothers- in- law, Walter Johnson (Tamara) of Rocky Mount, NC, Devin “DJ” Johnson of Greenville NC; three sisters-in- law, Joya S. Johnson of Greenville NC, Pam Mayfield and Nakia Purvis both of Connecticut; two nephews, Justin and Darrian Johnson of Virginia; one niece, Zaria Charity; three special friends, Felishia Neal, Tesha Best, and Tiyana Cole; a host of aunts, uncles, cousins, coworkers and friends.

The family of Mrs. Tarsha Johnson created this Life Tributes page to make it easy to share your memories.

Tarsha Michelle Daniels Johnson
In the early morning hours of...