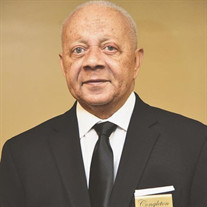 For I am now ready to be offered and the time of my departure is at hand. I have fought a good fight, I have finished my course, I have kept the faith. 2 Timothy 4:6-7 On Saturday, April 4, 2020 at the age of 61, Steven McDaniel peacefully transitioned to Glory at Vidant Medical Center. Steven McDaniel was born on December 9, 1958 in Morristown, New Jersey to the late Charlie and Adeline Bell McDaniel. Steven was reared in Falkland, NC by his late Uncle and Aunt Clarence and Gleaner Bell Bembry. “Stevie” attended Falkland Elementary School and Farmville Central High School, “Class of 77” in Farmville, North Carolina. He completed his tenure at Cosmetology School in Baltimore, Maryland. “Stevie” gave his life to Christ at an early age and united with the family church, St. John Missionary Baptist Church, Falkland, North Carolina. “Stevie” was blessed with gifted hands; at a very early age he played the drums for the Rock Island Singers. He also played various sports. “Stevie” could light up a room when he walked in. “Stevie” was a people person, a great salesperson and had a great sense of humor. He was an exceptional entrepreneur and never met a stranger. “Stevie” returned to his roots after spending several years in Maryland, New Jersey and Charlotte, North Carolina. He was employed with several jobs in the Greenville area. His most recent employer was Kia Dealership. “Stevie” became a member of Greater Life Community Church under the leadership of Reverend Tory Cox. “Stevie” was preceded in death by siblings, Charlie McDaniel and Cherry G. McDaniel. “Stevie” is survived by his devoted wife, Luz; daughter, Mia Evans (Ryan) of Charlotte, NC; stepson, Najee of the home; grandsons, Ephraim and Kairo of Charlotte, NC; sisters, Paulette McDaniel of Winston Salem, NC, Penny McDaniel of Greenville, NC, Edith Outterbridge of Falkland, NC and Annie Hughey (Sylvester) of Greenville, NC; brothers, Glen Wilfong (Armedia) of Charlotte, NC and James C. Bembry (Linda) of Greenville, NC; uncle, James T. Bell (Karen) of Montclair, NJ; numerous nephews, nieces, cousins, dear friends and “Special” Canine children, Diamond and Pound Cake, other relatives and friends. “Stevie” fought a good fight. He Never gave up; he only gave in to the Master’s Call!

For I am now ready to be offered and the time of my departure is at hand. I have fought a good fight, I have finished my course, I have kept the faith.... View Obituary & Service Information

The family of Mr. Steven McDaniel created this Life Tributes page to make it easy to share your memories.

For I am now ready to be offered and the time of my departure...

Send flowers to the McDaniel family.