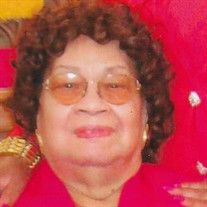 Shirley Sadler Merrick “Mother” quietly and peacefully transitioned to eternal rest on Saturday, July 13, 2019. Shirley, one of ten children, was born on April 12, 1936 in the New Holland Community of Swan Quarter, NC to the late Armstead and Louella R. Sadler. Shirley joined St. Lydia Missionary Baptist Church at an early age. She served faithfully as a member of the Board of Trustees and a member of the Mother Board where she served in that position until her failing health and death. Shirley was a loving wife and partner to Thad Merrick, Sr. for 64 years. During this union they were blessed with two sons, Terry Merrick & Thad Merrick, Jr. (both deceased) and five daughters. Shirley was a graduate of Davis School. Upon graduating from Davis School, she began her career teaching Head Start. She drove the school bus and worked full time in the school cafeteria for many years. She later became the cafeteria manager. Also, Shirley worked full time at Harry Jarvis Restaurant until it closed. She and her daughter Nerissia closed the restaurant on the last night of its operation. Shirley was awarded certificates in food service from Beaufort Community College and Elizabeth City State University. She was known as one of the best cake bakers in the county. In addition, Shirley was a news reporter for the News and Observer for several years. She retired from the Hyde County School System after 30 years of service. After her retirement from the school system, she participated as a member of the Hyde County School Retire Personnel. Shirley was blessed with the opportunity to exemplify many compassionate characteristics throughout her earthly life towards her family and friends to include but not limited to a loving wife, grandmother, caring sister, aunt, cousin, and friend. However, the characteristic she cherished the most is “Mother”. She was known as “Mother” not only to her biological children, but also to many individuals to whom she extended a helping hand. Shirley loved people and she loved helping people. She made it her mission to be a blessing to all she came into contact. She was a member of the Hyde County Missionary Baptist Association, the Women’s Baptist Auxiliary, and the Baptist Church Union. She loved and supported her church and she loved serving faithfully as “Mother of the Church” at Saint Lydia Baptist Church until her health prohibited her from attending. Shirley is survived by her beloved husband, Thad Merrick, Sr.; five daughters, Linda Merrick of Swan Quarter, NC, Nerissia Merrick of Durham NC, Debra Johnson (Rodney) of Hampton, VA, Carolyn Johnson of Hampton, VA, Pam Green (Oris) of Glen Burnie, MD; nine grandchildren, Teneisha (Edward), Wesley, Michael, Ramon, Oris (Alicia), Kyla, Niesha, Malcom & Shirley; four great-grandchildren, Terri, Edward, Noah, & Kaiden; one brother, Sammie Sadler of Dallas, Texas; one sister, Emma Sadler Blount of Newport News, VA; two brothers-in-law, Jerome Blount, Joseph Merick; a host of nieces, nephews, cousins other relatives and friends. To God be the glory for a life well lived.

Shirley Sadler Merrick &#8220;Mother&#8221; quietly and peacefully transitioned to eternal rest on Saturday, July 13, 2019. Shirley, one of ten children, was born on April 12, 1936 in the New Holland Community of Swan Quarter, NC to the late... View Obituary & Service Information

The family of Mrs. Shirley Sadler Merrick created this Life Tributes page to make it easy to share your memories.

Send flowers to the Merrick family.