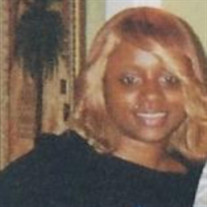 Shavonda Tyresia "Pebbles" Mitchell daughter of Helen and Michael Rogers was born on April 19,1984 in Newark, NJ. She departed her earthly life on Thursday, April 2, 2020 at Vidant Medical Center Greenville, NC. Shavonda was affectionately called "Pebbles" attended Pitt County Schools. She a creative writer; oftentimes she would create her own poems and graphic drawings. After graduation from high school, she attended Pitt Community College where she received her Pharmacy Tech. Certification. Pebbles accepted employment opportunities with several companies including Precious Moments Childcare and Pitt County Memorial Hospital now known as Vidant Medical Center. Pebbles years on this earth were filled with love, life, faith and hope. Anytime she entered a room you would certainly know it. No matter the occasion Pebbles was never afraid to be herself. She was extremely brave, loving, caring and humble. On September 19, 2002 Pebbles introduced the world to her first born Quamay Grimes Corey with unconditional help from her mother. Those two as she always said were the two loves of her life, and before she departed, she wanted that to be known to everyone. As Quamay continued to grow older, his mother taught him many things but most of all she taught him the true meaning of courage. In her leisure time, Pebbles enjoyed her old school music, hosting family and friends. She enjoyed the fellowship meeting new people, cooking and sharing a delicious meal. Pebbles enjoyed getting her nails masterfully done by her younger sister and being spoiled and pampered by her older sister. She was spoiled by many aunts in that they would cook so much food and treats for her. Pebbles had a four-legged baby named Rocky to share her love and joy. She had another bundle of joy that passed way after only three months after birth; she loved every precious moment that she had with Nasir Grimes Thomas. She never wanted to see her mother with worry or anxiety. In good or bad health Pebbles fought like no other whether it was securing her share of attention from her son or nephews and the fight for her health. Pebbles was not just a fighter but also a winner. Pebbles was preceded in death by our son, Nasir Grimes Thomas. Pebbles leaves to cherish her memory, one son, Quamay Grimes Corey of Greenville, NC; her mother, Helen Rogers of Greenville, NC; her father, Michael Rogers of Greenville, NC; two sisters, Quzmeerah Mitchell of Greenville, NC; Myeshia Butts (Aubrey); one brother, Gabriel Mitchell of Colorado; two devoted nephews, August and Myles Butts of Greenville, NC; best friend, Fantaisa Pratt of GA four legged baby, Rocky; two devoted aunts, Tiny Andrews and Aunt Jerry; a host of nephews, nieces, other relatives and friends.

The family of Ms. Shavonda Mitchell created this Life Tributes page to make it easy to share your memories.

Send flowers to the Mitchell family.