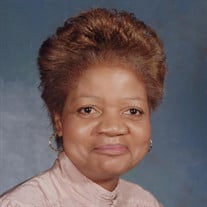 Open my eyes that I may see Glimpses of Truth hast for me. Place in my hands the wonderful key Of Faith that soon shall set me free. Silently now I wait for Thee Ready, My God, Thy will to see. Open my eyes illumine me, Spirit Divine. Ruby Jean Wilson, daughter of the late George and Mabel Wilson, was born in Pitt County on June 26, 1936. She departed this life on Wednesday, March 13, 2019 at her home with family and caregivers at her bedside. Ruby was educated in the Pitt County Public School System and graduated from Bethel Union High School in 1955. She attended Bennett College in Greensboro, N.C. and received her B.A. degree in Elementary Education. While working for two years in Rocky Mount, N.C., Ruby continued her studies at North Carolina Central University, Durham, N.C. Ruby decided to relocate to Washington, D.C. where she continued her teaching in the D.C. Public School System. She continued her studies online at La Verne University, LaVerne, California. Ruby took classes at D.C. Teachers College and received her B.S. degree from Catholic University in Washington, DC. Ruby taught for twenty-seven years until her health began to fail and she transitioned over as school librarian for another twenty-one years. Ruby retired from the Washington, D. C. Public School System in 1993 due to failing health after forty-eight years of service. Ruby was a loving daughter, sister, aunt and friend who loved reading, decorating and cooking. She was kind, loving, giving, tenderhearted and a friend to all. Ruby’s heart was big as gold, she would give to those in need within reason, and a true friend to those around her. Ruby was always elegantly in her attire, flawless with her makeup and fashionable, despite her disability. Ms. Ruby Jean Wilson was the last of the Wilson Family. She was preceded in death by her parents, George and Mabel Wilson; two brothers, Odell Wilson, Vester Wilson; five sister; Reba Crandall, Dean Wilson, Geneva Wilson, Rosa Bell Wilson, Isolene Wilson-Telfair. Ruby leaves to cherish loving and wonderful memories to, a host of nieces, nephews; one sister-in-law, Dorothy Wilson (Vester); other relatives and friends. “If when this life of labor is ended, and the reward of the race you run; Oh! Sweet the rest prepared for the faithful will be His blest and final “Well done.” Author Unknown

Open my eyes that I may see Glimpses of Truth hast for me. Place in my hands the wonderful key Of Faith that soon shall set me free. Silently now I... View Obituary & Service Information

The family of Ms. Ruby Jean Wilson created this Life Tributes page to make it easy to share your memories.

Open my eyes that I may see
Glimpses of Truth hast for me....

Send flowers to the Wilson family.