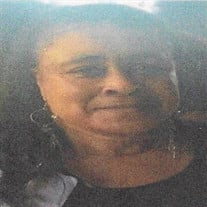 Rosa Mae Ebron-Johnson was born October 22, 1944 in Stokes, NC to Major and Mary Ebron, she was the 7th born of 14 children. She departed this life on April 24, 2021 at Vidant Medical Center. Rosa attended schools in Pitt County and later become employed in Bethel and Pitt counties. Rosa accepted Christ at an early age and was an active member of Community Christian Church until the pandemic kept her from attending. She resided in Snow Hill until 2019 and decided to move back to Greenville where she resided until she took ill. Rosa’s hobbies included gardening and canning as well as playing cards with her close friends. She was involved in many family activities until her health began to fail. After a lengthy illness, God saw fit to end her suffering and bring her home where she was surrounded by a devoted family member at her side. Everyone that knew Rosa, affectionately known to her family as “RoeMae”, knew that she commanded attention wherever she went. She knew everybody and never met a stranger. One conversation was all it took, and you were friends forever. was preceded in death by her parents, Major and Mary, and six siblings. Rosa leaves to cherish her memory two sons, Andre (Angie) and Donte’(Lynne) both of Georgia; two kids she raised, Kenneth Thorl (Trina) and Rochelle Kent-Mark; 12 grandchildren, Brittnee, Michael, Michael, Jawanzah, Marcus, Ayana, Makayla, Tamiyah, Savannah, Donte’, Jr., Taylor, Destiny, Donte III, and DJ; five great-grandchildren; six brothers, Jessie (Verna), Wallace T, Charles (Geraldine), Hassell, Herman ”Larry” and Lloyd Lee; one sister, Mary Barrett (Edward); a devoted niece, Kasheta (Petro), along with a host of nieces, nephews and several close relatives; a lifelong friend Clara Jackson of Delaware. will be greatly missed but we that believe in Christ, know that she is resting with her family and in the arms of Jesus.

Rosa Mae Ebron-Johnson was born October 22, 1944 in Stokes, NC to Major and Mary Ebron, she was the 7th born of 14 children. She departed this life on April 24, 2021 at Vidant Medical Center. Rosa attended schools in Pitt County and later become... View Obituary & Service Information

The family of Ms. Rosa Mae Johnson created this Life Tributes page to make it easy to share your memories.