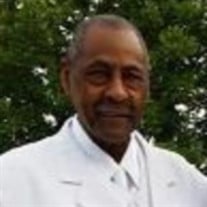 Ronnie Lee Peele was born to the late Joe Lester and the late Isolene Maye Peele in Martin County, NC on August 1, 1951. He entered into eternal rest on Saturday, April 3, 2021 at Vidant Medical Center, Greenville, NC. Ronnie attended E.J. Hayes High School in Williamston, NC. One day in 1971 while he was walking to work, he met Cynthia Whitley on her way home from school. They were later married on April 7, 1973. Through this union two children were born Jamilia and LeShonda. In 1973 Ronnie enlisted in the US Army where he served 23 years. During this time, he worked for E.J. Hayes as a custodian, Martin County Landfield, Weyerhauser, and retired from Fountain Power Boats in December of 2008 where he worked as an upholster. Ronnie was an E.J. Hayes Alumni, a member of NAACP, and a member of Positive People in Action Social Club for ten years. Ronnie joined House of Prophecies and Prayer Church in 1990. Soon after he was called to duty in the Gulf War. When he returned, he was ordained as a minister by Prophet Sadie Lee Miles and later ordained as the Pastor of Williamston, NC Church. He served the Lord for over 31 years. Ronnie was a devoted and loving Pastor, husband, father, and grandfather. He loved calling on the name of Jesus, coffee, seeing his McDonalds crew/morning friends. One of his hobbies were to collect electric train sets and airplanes. He always had something to joke about and his favorite sayings were, “you got that right”, “ain’t he real”, “can’t nobody do you like Jesus” and “you got to be wrapped up, tied up and tangled up in Jesus.” Ronnie was proceeded in death by his father, Joe Lester Peele and mother, Isolene Maye Peele; one sister, Lydia Peele Burden; one brother, John Peele. Ronnie leaves to cherish his memories his wife, Cynthia W. Peele of Robersonville, NC; four children, Frederick Slade (Angela) of Greenville, NC; Jamilia Peele Williams (Clifton) of Mahwah, NJ, LeShonda Peele Lee (Jesse) of Bridgeport, CT; adopted daughter, Juanita Glenn (Dwayne) of Mahwah, NJ; seven grandchildren, Fantasia Slade, Netanel Peele aka Peele, Jr., London Williams and Jesslyn Lee, Letitia Flood, Deja Flood, Rashawn Flood; two great-grandchildren, Envie Clark, Landen Harrison; three brothers, Joe Lester Peele of Columbus, OH, Eddie Peele (Victoria) of Farm Life, NC and Timothy Peele (Lynshonda) of Greenville, NC; two sisters, Alice Slade (Jimmie) of Robersonville, NC and Mary Peele of Greenville, NC; one uncle, Curtis Peele; one aunt, Eva Hodges; one sister-in-law, Vivian Whitfield (Mack) of Everetts, NC; one brother-in-law, Leon Burden; one godchild, Roderick Whitfield of Bridgeport, NC; a host of nieces, nephews, cousins, and friends.

The family of Pastor Ronnie Lee Peele created this Life Tributes page to make it easy to share your memories.

Ronnie Lee Peele was born to the late Joe Lester and the
late...

Send flowers to the Peele family.