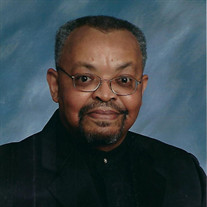 But they that wait upon the Lord shall renew their strength; they shall mount up with wings as eagles; they shall run, and not be weary; and they shall walk and not faint. Isaiah 40:31 Mr. Ronald Randolph was born on March 23, 1952 the oldest of four children to the late Ms. Mary Eva Randolph and the late Mr. Haywood Spain. He was a Greenville Native and a graduate of CM Epps High School class of 1971. After enlistment in military ARMY and returning home he was employed with Grady White Boats as a supervisor and ECU Housekeeping as a supervisor. He started going ECU Dialysis in 2012. Mr. Ronald Randolph was preceded in death by his sister Mary E. Randolph. Ronald leaves to cherish his memories, his loving wife of twenty-three years, Diane Ward-Randolph of the home; mother, of his children, Ms. Glenda Faye Barnes; sons, Ronald Randolph, Jr. of Hailey, Idaho, Brandon Randolph of Greenville, NC; Daughters, Katesha Wallace (Sheldon) of Greenville, NC, Real Weatherly (Corey) of Hailey Idaho, Leslie Jones of Clayton, NC, Jamalia Ward of the home and Gabriella Ward of Greenville, NC; a special granddaughter that he raised, JaNautica Ward of the home; grandsons, Tyler, Joshua, Alexander, Brandon and Kaiden “Superboy”; granddaughters, Real, Chaniah, Nykeriah, Onya, Tanaisa, Hannah, Reece, JaNasia and Erin; great-grandsons, Marques and Tyshawn; great-granddaughters, Amy, Avari and Akilah; one sister, Ms. Teresea Randolph of Winterville, NC; one brother, Mr. Carlton Ray Randolph of Greenville, NC; father in law Mr. James Louis Ward of Greenville; one sister-in-law, Eva Mae Fields of Greenville, NC; brothers-in-law, Mr. James Louis Ward, Jr. “Buckshy” of Greenville, NC, Mr. John Frank Ward (Angel) of Raleigh, NC, Mr. Bobby Ray Ward (Lisa) of Greenville, NC and Mr. Mitchell Ward (Pat) of Simpson, NC; special cousins, Mr. Harold Randolph of Winterville, NC and Apostle Ricky Randolph (Sandra) of Wilmington, NC; a host of nieces, nephews, other relatives and friends. O death, where is thy sting O grave, where is thy victory 1 Corinthians 15:55

But they that wait upon the Lord shall renew their strength; they shall mount up with wings as eagles; they shall run, and not be weary; and they shall walk and not faint. Isaiah 40:31 Mr. Ronald Randolph was born on March 23,... View Obituary & Service Information

The family of Mr. Ronald Randolph created this Life Tributes page to make it easy to share your memories.

But they that wait upon the Lord shall renew their strength;...

Send flowers to the Randolph family.