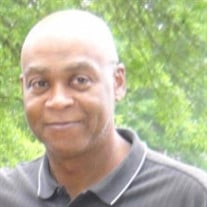 On Monday, June 22, 2020, God sent his angels to give heavenly wings to Ronald “Ron” Thomas Brown. Ronald was born on July 29, 1958 in Martin County to Mr. and Mrs. Booker T. Brown. “Bruser” as he was lovingly known, was raised in Williamston, North Carolina and graduated from North Carolina A&T State University on May 3, 1981 with a Bachelor of Science degree in Industrial Technology. Ron was employed as a Telecom Engineer for over 30 years and was scheduled to retire in July 2020. Ron was an avid Pittsburgh Steeler fan who loved sports to include golfing, basketball, and football. He also loved to travel, teach his daughter’s sports, and have fun with his family. Ron was a member of Elevation Baptist Church in Raleigh, North Carolina and he attended Lift Community Church in Garner, North Carolina. He loved the Lord and his family. His pride and joy was his two daughters, Brittany and Courtney. Ron is survived by his loving and loyal wife of 38 years, Clothilda Brown; his two children, Brittany Brown of Raleigh, NC (fiancée, Vince); Courtney Brown Sanders of Raleigh, NC (Jordan); his parents, Mr. and Mrs. Booker T. Brown of Williamston, NC; his brother, William Jerome Brown of Williamston, NC (Belinda Slade); his sister, Patricia Scott of Clarksville, TN (Mitchell); Tony Lee Brown of Jacksonville, FL (Meleeza); nieces and nephews, Vivica Lockamy of Greenville, NC, Tametra Brown of Greenville, NC, Mitchell Jr. of Japan, Maurice Scott of Clarksville, TN, Latoya Scott of Clarksville, TN, Ramel Brown of Jacksonville, FL, Anneliza Brown of Jacksonville, FL, and Anntony B. Brown of Colorado. He was also survived by a host of other loving in-laws, cousins, relatives, and friends.

The family of Mr. Ronald Brown created this Life Tributes page to make it easy to share your memories.