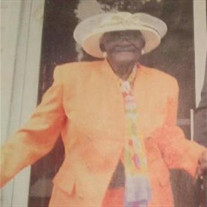 Rena "Drip" Peartree Whitney was born on June 11, 1919 to the late Samuel and Tennie Peartree. She departed this life on February 14, 2020 at Vidant Beaufort Hospital in Washington, NC. Rena was born in Hyde County but relocated to the Terra Ceia Community. She was a pillar in the community. Her early work history was on different farms in Beaufort County. For a lady with no formal education, you could not beat her counting money and knowing the Bible. After 14 years of service, Rena retired from the Armature Department of Hamilton Beach in Washington, NC. Rena was a life-long member of Queen Chapel Church of Christ Disciples of Christ in Terra Ceia, NC. The late Elder G.R. Lovick was a great inspiration in her life. Rena's house was the community hangout. Many people spent countless hours in her her house and on the porch eating her food: bread pudding, pineapple cake, salad greens, and collards. Her late husband would say, "Drib", you got those biscuits ready? She'd go on singing songs like "Sweeping through the city" and telling stories that kept you glued to your seat, as she talked about her upbringing. She would say, "it was rough, but I made it. I worked and took care of my family, especially my mom and dad." She'd always recall her favorite scripture, "The Lord is my Shepherd, I shall not want." Rena was preceded in death by her husband, Mack Ray Whitney; two sons, Jimmy Whitney, Mack Ray Whitney, Jr.; daughter, Ruby Bunch; son-in-law, Harry Booth; four grandchildren, Calvin Jr., Michelle Gray, Jimmy Whitney, Jr., Ralph Burgress; four brothers, Joseph (JulieMae), Sammuel, Clifton (Nancy) and Eddie Peartree. Rena leaves to cherish in her memory, Delois Booth of Acre Station, NC, Sandra Holloway(Earl) of Terra Ceia, NC, Ralph Whitney (Dee) of Chocowinty, NC; one daughter-in-law, Mary Whitney of Brooklyn, NY; ones sister-in-law, Sophia Lewis; one son-in-law, Deacon Ray Bunch; two sisters-in-law, Mother Bessie Peartree of Terra Ceia, NC, Minister Carlene Peartree of Chicoppe, MA; a devoted grandson, Otha Holloway of Chocowinity, NC; twenty-five grandchildren; thirty-seven great- grandchildren; thirty great-great-grandchildren; one great-great-great-grandchild; a host of nieces, nephews, other relatives and friends.

Rena "Drip" Peartree Whitney was born on June 11, 1919 to the late Samuel and Tennie Peartree. She departed this life on February 14, 2020 at Vidant Beaufort Hospital in Washington, NC. Rena was born in Hyde County but relocated to the Terra... View Obituary & Service Information

The family of Mrs. Rena Whitney created this Life Tributes page to make it easy to share your memories.

Send flowers to the Whitney family.