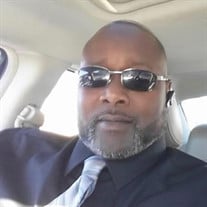 Reginal “Reggie” Hines departed his earthly home peacefully surrounded by his loved ones on January 30, 2022. Reginal was born on March 23, 1964 in Washington DC to the late Lissie T. Blount and Lee Edward Vines. In 1982 Reggie graduated from JH Rose High school and furthered his education in Business Administration. He possessed a gift of gab that led him to succeed in managing retail stores and auto dealerships over the years. After relocating to Virginia, he met and later married his wife, Dorothy. Reggie was a vivacious individual who loved to spend time with his family. He had a unique sense of humor and a laugh that was so loud it was like no other. Reggie’s mother use to tell him, “Boy, I can hear your mouth from down the block!” With the personality Reggie possessed, it was not uncommon to catch him singing and snapping his fingers for the love of music. Reggie had a great passion for fishing and regardless of whether he was alone in the early morning hours or in the company of family and friends, he truly enjoyed this hobby. In addition, Reggie considered himself to be a grill master, a lover of all sports and was an avid Red Skins fan. One of Reggie’s most prideful moments is the day that he accepted his Lord and Savior along with joining the KCC Church family in 2020. Reggie was proceeded in death by his eldest brother, Melvin C. Turnage in 2019. Reggie will forever be in the hearts of his loving wife, Dorothy; daughters, Christina Alston of Norfolk, VA, Robyn Wolf of Atlanta, GA, and Afton Walker of Detroit, MI; sons, Donald Hudgins of Atlanta, GA, Donte Taylor of Norfolk, VA; sisters, Denise Hines of Greenville, NC, Tanisha Muhammad (Andre) of Chicago, IL, and Minnie Perez (Hector) of NYC; brothers, Demetrius Vines and Lee Edward Vines Jr. of NYC; 12 grandchildren, 8 great grandchildren; sisters-in law, Cynthia Turnage, Evelyn Sharpe (Marvin), Nellicile Royals; a host of nephews, nieces other family members and friends

Reginal &#8220;Reggie&#8221; Hines departed his earthly home peacefully surrounded by his loved ones on January 30, 2022. Reginal was born on March 23, 1964 in Washington DC to the late Lissie T. Blount and Lee Edward Vines. In 1982 Reggie graduated... View Obituary & Service Information

Send flowers to the Hines family.