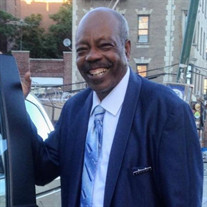 On September 20, 1945 Rayfield Hopkins was born to the late Marion Ernest Hopkins and Annie Washington Hopkins in Pitt County. He was the first baby boy born. He departed this life on Sunday, June 7, 2020. Rayfield attended segregated schools within the Pitt County, N.C school system,namely; Nichols Grammar school in Bell Arthur, Bruce-Falkland school in Farmville even after the family relocated to 200 Nash Street in Greenville. He was a member of the 1965 graduating class of H.B. Suggs. Upon relocating to the big Apple he married Addie Dixon, who is also a Bell Arthur native on October 26, 1966. He was a man of God who believe in going to God’s house and worshiping him. He fellowships at Arthur's Chapel Free Will Baptist Church, under the pastorate of the Bishop Samuel Hemby, Jr. When Rayfield relocate to New York City he also continues to worship God. On December 9, 2012 he joined Franklin Ave Baptist Church under the leadership of Rev. Idus A. Nunn, Jr. He received the right hand of fellowship on January 16, 2013 Rayfield was ordained as a deacon on February 6, 2016. He was a member of the Deacon’s Ministry where he served as a vice chairman, the Pastor Aid and the Men's Ministry. Rayfield was a worship leader on Sunday's morning and on prayer service nights. Rayfield work as a farm laborer in Bell Arthur and as a yard boy and a butler for the white citizens in Greenville, NC as a young man. He always worked in a warehouse, Steel company in Long Island, YMCA , then he started working at the Department Of Park and Recreation. Rayfield worked at the parks and recreation for 24 years and retired in December of 2010 as a Level II supervisor. Rayfield is preceded in death by his brother, Marvin Hopkins Rayfield leaves to cherish his memories, his loving wife, Addie Dixon of the home; proud father of nine children, Demark Dixon of Bronx, NY, Gloria Dixon of Bronx, NY, Pamela Hopkins of Bronx, NY, Stacy Hopkins of Bronx, NY, Shaquana Hopkins of Harlem, NY, Marvin Hopkins of Harlem, NY, Lamonte Hopkins of Harlem, NY, Natalie Hopkins of Harlem, NY; fourteen grandchildren, Shaquanna, David, Dequan, Damark, Antwan, Tyleek, Khadeidrah, Willie, William, Daisha, Anthony, Portia, Shana, Meika; 32 great-grandchildren; one sister, Lois Barrett Harrington of Greenville, NC, Ernest Hopkins, Jr (Denise) of Elgin, S.C, Melvin Hopkins (Belinda) of Snellville, Georgia, Timothy Barrett of Newark, N.J; one aunt, Nora Washington of Greenville, N.C, many nieces, nephews, cousins and a host of other relatives and friends.

The family of Mr. Rayfield Hopkins created this Life Tributes page to make it easy to share your memories.

Send flowers to the Hopkins family.