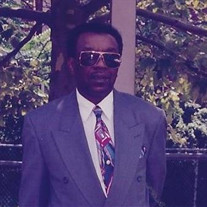 Mr. Peter Zimmeriah Watson aka &#8220;Pete&#8221; was born on July 19, 1932 in Richland, Georgia to the late Eddie Watson and Pearl Moses Watson. He was raised by his grandmother Pinky Moses. He departed this life on Sunday, January 26, 2020. Pete... View Obituary & Service Information

The family of Mr. Peter Zimmeriah Watson created this Life Tributes page to make it easy to share your memories.

Send flowers to the Watson family.