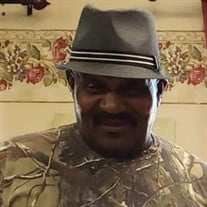 Paul Cleveland Anthony Sr, 79, of Greenville NC departed this life on Saturday, February 12, 2022, when God sent his guiding angel to welcome him home from labor to reward. He was a man who believed strongly in the Lord, and he would sing about it so beautifully. He had an amazing voice and didn’t mind sharing it. He was born August 8, 1942 in Halifax County, NC to Cleveland and Pecola “Beaulah” Anthony. He attended Halifax County Schools. Paul was united in marriage to Dorothy on March 15, 1965 and they were together for 56 wonderful years. They had 4 children. Paul worked on the farm for most of his life, he retired from Davenport Farms in Pactolus NC after over 45 years. He was well known in the Pactolus community and was always willing to lend a hand to any neighbor or friend in need. He was affectionately known as “PaPa” to his great grandchildren who adored him and had him wrapped around their little fingers. You could find him most days after retirement working at Lee’s Country Kitchen. He never met a stranger and made many lasting friendships during his time there. He was employed there until he took ill. Paul was preceded in death by his parents, Cleveland and Beaulah Anthony; his brothers, Bernice, Charlie Lee and Larry Anthony; sisters, Etheline Reid, Juanita “Kitty” Williams; his beautiful daughter, Evelyn Anthony Whichard. Paul leaves to cherish his memory his loving and caring wife, Dorothy “Dot” Anthony, his children, Carolyn Williams (Ernest) of Washington NC, Paul Jr Anthony, Sheila Evans (Lee) of Greenville NC and James Harris (Annette) of Wilson NC; two sisters, Betty Anthony of Greenville NC, Barbara Moore (Kinney) of Washington NC; seven grandchildren, Shoniece, Octavia, Andrea, Tiffany, Kendrick, Jazcha, and Jaquez, ten great- grandchildren and a host of nieces, nephews, other relatives, coworkers and friends. Paul had his special little “6 pack”, that he was always spoiling, and PaPa wouldn’t let anyone mess with them, and they usually got their way with him. His granddaughter, Shoniece Anthony, whom he help raise and his great grands, Shaniyah Anthony, Rayyon Cherry, Shariyah Cherry, Shameia Cherry and Rayshon Cherry.

Paul Cleveland Anthony Sr, 79, of Greenville NC departed this life on Saturday, February 12, 2022, when God sent his guiding angel to welcome him home from labor to reward. He was a man who believed strongly in the Lord, and he would sing about... View Obituary & Service Information

Send flowers to the Anthony family.