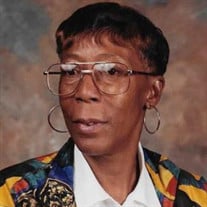 “And God shall wipe away all tears from their eyes: And there shall be no more death, neither sorrow, nor crying, neither shall there be any more pain: for the former things are passed away” Revelation 21:4 Olivia Burnett Mitchell affectionately called “Lil” and “Libby Gal”, was born on October 2, 1942 in Baltimore, Maryland to the late Clennie Burnett, Sr. and Lucy Evans Burnett. Olivia spent her early years between Baltimore and Greenville NC and received her early education in the Pitt County Public School System. As a teenager Olivia moved to Kinston to live with Godparents, Robert and Faye Evans who lovingly reared her. She continued her education in the Lenoir County School System and returned to Greenville as a young adult. Olivia worked at Jack Norfleet’s neighborhood store and later Strollo’s store for many years. “Lil” always had a kind word and a funny story to tell. In the late 70’s Olivia furthered her education at Pitt Technical Institute and obtained her Associates Degree in Early Childhood Education. She was employed by Pitt County School System as a Teacher’s Assistant until her retirement. The students and staff loved her bluntness and funny comments. Olivia was united in Holy Matrimony to Barrie Mitchell, April 27, 1989 and was married for 31 years. Olivia was preceded in death by her parents, Clennie and Lucy Burnett; her eldest son, Terry Burnett; her daughter, Latreviette Burnett; her brothers, Clennie Burnett Jr., and Zeno Burnett. Olivia leaves to cherish her loving memories; her husband, Barrie Mitchell of the home; two sons, Kevin Cobbs (Tieasha) of Knightdale NC, Devon Mitchell of Greenville; three daughters, Lakesha Peele of Greenville, Trinette Dixon of Winston Salem, Devetta Watson of Winston Salem; fifteen grandchildren; two great-grandchildren; one loving inseparable sister; Edna Jones (Frank) of Greenville; two brothers; Virgil Burnett of Greenville and Allen Burnett (Sandra) of Enfield; her two God brothers; Gregory and Ronald Evans of Kinston; two uncles, Darrell German of Greenville, Wendell German (Vivian) of Goldsboro; four Goddaughters, Annette Nicholson of Greenville, Anjanette Smith of Greenville, Shewanda Jones of Raleigh, Dawn Phillips of Winston Salem; special niece and nephew whom she helped raise, Angela Hart (Keith) of Greenville, Gene Carr Jr. (Carlene) of Dumfries, VA; a host of nieces, nephews, other relatives and friends.

&#8220;And God shall wipe away all tears from their eyes: And there shall be no more death, neither sorrow, nor crying, neither shall there be any more pain: for the former things are passed away&#8221; Revelation 21:4 Olivia Burnett Mitchell... View Obituary & Service Information

The family of Mrs. Olivia B. Mitchell created this Life Tributes page to make it easy to share your memories.

“And God shall wipe away all tears from their eyes: And there...

Send flowers to the Mitchell family.