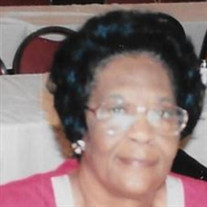 Norvella Keyes Lloyd was born on January 12, 1934 to the late Sir Walter Raleigh Keyes and the late Minnie Hill Keyes in Jamesville, NC. Norvella Keyes Lloyd grew up in the Darden community in the township of Jamesville, NC. At an early age Norvella joined the Union Town Church of Christ in Jamesville, NC and later moved membership to St. Mark Church in Everetts, NC. At St Mark church she participated in a number of activities including treasurer of beautification owl, member of the young women's auxiliary, member of the calendar committee and Mother of the church. Norvella Keyes Lloyd attended school in the Martin county school system. She graduated from the colored high school, now known as E.J. Hayes high school, as Valedictorian in 1951. After her high school graduation Norvella attended North Carolina Central University and graduated in 1955 with an AB degree in Sociology and Library Science. She was a part of the founding chapter of the Alpha Kappa Alpha Sorority, Y.W.C.A, and the Social Science Club. Upon graduating from college, Norvella was employed by the Martin county school system where she taught for 20 years. After becoming married to the late Theodore Lloyd, Jr. the couple was blessed with a darling daughter, the late Sonya Eugenia Lloyd. Norvella made a transition from mortality to immortality on Monday, January 3, 2022. She passed peacefully and was prepared and ready to meet her Lord and Savior Jesus Christ. If you knew Norvella, you knew that she loved Jesus and was never ashamed to share the word of God with anyone she met. Norvella was a true servant of the lord, helping those in need whenever and however she could. She was the Matriarch of her family, a confidant to her friends and a pillar of her community and church. Norvella was preceded in death by her husband, Theodore Lloyd, Jr; her daughter, Sonya Lloyd Rustin; her siblings, Herbert Keyes, Lona Garrett, Odelsia Keyes, Carolyn Shipp, Walter Keyes, Vernita Moore. Norvella and her only remaining sister, Nina Robinson had a close relationship and Nina will truly miss her. Norvella leaves to cherish her memory, sister, Nina Keyes Robinson (William); grandson, Cameron Rustin; granddaughter, Brittany Rustin-Johnson (Kristin); great grandson, King Johnson; a host of nieces, nephews, other relatives and friends.

Send flowers to the Lloyd family.