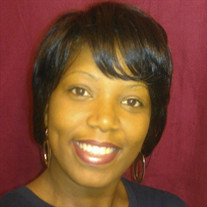 Due to COVID-19 restrictions, mandated by Governor Roy Copper the funeral of Mrs. Norma McFadden will be by invitation only. Norma Ruth McFadden returned to her heavenly home on May 11, 2020. Although her return was unexpected and traumatic for the family, she so deserved to be absent from the body and present with the Lord. Her devotion to her family and her firm belief in God ultimately led her to peace. Norma was born in Paterson, N.J. on October 12, 1971 to Earl Roman Singletary and the late Mary Lee Singletary. After living in the city for 29 years Norma McFadden found the love of her life and married David Earl McFadden Sr. in 2003. After obtaining an Associate Degree in Business Administration the love birds decided to pack up the kids and purchase a house in Farmville, NC. She so enjoyed the country lifestyle that involves great weather, beautiful sceneries, and that southern hospitality. Norma was a devoted wife and mother and an extremely hard worker. She was employed at Vidant Medical Center for the past 13 years as an Administrative Secretary. For over thirty years she was dedicated to serving the Lord with humility and love. She became the Youth Director at Victory Christian Assembly in Greenville, NC for five years. Her passion for God continued as she directed her service for the Lord at Open Door Church in Winterville, NC for the past eight years. Of course, there is no perfect church, but whole-heartedly she knew that this church was perfect for her. Norma was truly kind, respectful and a caring person. She welcomed people with genuine love and a sparkling smile. Loving her family was a daily mission in-which she thoroughly enjoyed. Her family was her life and she would often say “I LOVE MY FAMILY” in which they would respond “WE LOVE YOU TOO!” Norma is survived by her husband David Earl McFadden Sr, her children, Mary Cobb (Son-in-Love Tony), Garrett Nathaniel Deal, Jr. (his girlfriend, Richchelle), David Earl McFadden, Jr.; her father, Earl Roman Singletary, Mother-in-Love, Mamie McFadden; three grandchildren, Damir, Mariah, Mason Cobb; three siblings, Catherine L Stamps (Spencer), Earl Rommie Singletary (Chiquita), Nancy Beamon (Gerard); a host of beloved aunts, uncles, nieces, nephews, other relatives and friends; one God Son, Ryan; life-long friend, Nicole Sims; family pet dogs, Jersey and Marlee.

Due to COVID-19 restrictions, mandated by Governor Roy Copper the funeral of Mrs. Norma McFadden will be by invitation only. Norma Ruth McFadden returned to her heavenly home on May 11, 2020. Although her return was unexpected and traumatic... View Obituary & Service Information

The family of Mrs. Norma McFadden created this Life Tributes page to make it easy to share your memories.

Send flowers to the McFadden family.