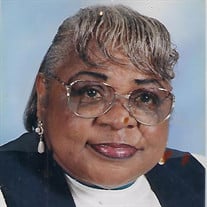 Never Getrude Knight was born to the late Oscar Nathaniel and Mable Farmer on the 28th day of November 1934 in Philadelphia, PA where she lived most of her adult life. As her health started to become challenging, she relocated to Greenville, NC to be with her family until her calling of the Lord. Never was educated by the Philadelphia Public School system. She spent a great deal of her life serving the Lord. Never has been a member of Christian Stronghold Baptist Church for well over 30 years, where her faith has continued to grow stronger within the Lord. Sweet, and humbleness was the feeling you got being in her presence. Never was an advocate for her community, where she has clothed, housed those in need, volunteered in numerous charities including travel ministries in Canada to feed people in need. Feeding anyone in her community was her absolute favorite thing to do. She would not see a soul go hungry. Her door was always welcomed to her community. If it was food needed and people to be fed Never was there taking over the kitchen. From Men’s breakfast groups, to daycares, to shelters, just to name a few, she was there to serve. Never will be missed dearly and will forever be remembered and loved. was preceded in death by her husband, Henry Knight; son, Henry Knight Jr. “Brother”; six brothers, Roosevelt, Butch, Willie, Paul, Ruffus, Nathaniel; four sisters, Mable, Myrtle, Osie, Stella; and in-laws. Never leave to cherish in memory her daughter, Eileen Wilson (Larry); her sister, Francis; her grandchildren, Willie (Bamm-Bamm) Knight, Lakischa Council (Keith), Christina Moore; nine great-grandchildren, Tymesha (Kajah), Keith Jr, Nydeira, September, Lamar, Greg Jr, Jeramie, Haylee, and Katelyn; six great-great grands; a host of nieces, nephews, other relatives and friends. Never loved her family with all her heart and energy. We love her, and will miss her dearly, will honor her name thru blessing others, as she spent her life doing.

Never Getrude Knight was born to the late Oscar Nathaniel and Mable Farmer on the 28th day of November 1934 in Philadelphia, PA where she lived most of her adult life. As her health started to become challenging, she relocated to Greenville,... View Obituary & Service Information

The family of Ms. Never Getrude Knight created this Life Tributes page to make it easy to share your memories.

Never Getrude Knight was born to the late Oscar Nathaniel and...

Send flowers to the Knight family.