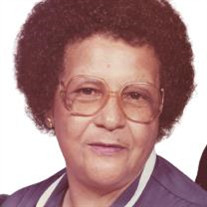 On December 11, 2021, God in His infinite wisdom dispatched an angel to 70 Gull Rock Road, Engelhard (Slocomb Community) to gently close the eyes of our dearly beloved Neta Mae Gibbs Blount, daughter of the late Wilton and Lucy Swindell Gibbs. Neta Mae was born November 8, 1925 in Lake Landing. She attended the Hyde County Training School in Sladesville, NC where she stayed with Mrs. Elgie Whitaker Credle during the weekdays and went home on weekends. At an early age, she joined Mount Pilgrim Missionary Baptist Church. It was there that she acknowledged Jesus Christ. In dedication to God, she served on the Usher Board as President and later under the leadership of Rev. John Chance, she was set aside as Mother of the Church. She had numerous fundraisers for the improvement of the church. She was a member of Magnolia Chapter Order of the Eastern Star. Neta and her husband were owners of Blount’s Groceries and Blount’s Playground for several years until their health declined. She loved her family and looked forward to her daily calls and visits. She was fond of the color red, and her favorite pastimes were watching Family Feud, writing memories from her past and reciting her favorite scripture, Psalms 121. On July 29, 1942, she was united in Holy matrimony to Fred Ebert Blount who preceded her in death on September 5, 2005. To this union five children were born, one daughter who died at birth, and four sons. In addition to her parents and husband, Neta was preceded in death by five sisters, Mary, Irene, Virginia, Lucy, Willie; one brother, Thomas, and a daughter-in-kind, Gloria. She leaves to cherish her fond memories four wonderful sons, Alton Blount (Martha) of Greenville, NC, Fred “Mike” Blount Jr. (Carolyn) of Taylor, MI, Donnie Blount (Theresa) of Swan Quarter, NC, and Melvin Blount (Shirley) of Engelhard, NC; one sister, Myrtlene Simmons of Brooklyn, NY; two sisters-in-law, Darnella Benston and Willie Mae Harris (Benjamin); three brothers-in-law, Thurman Blount (Janie Mae), Ronald Blount (Delores) and David Blount (Betty); she was over excited to have ten grandchildren, Stephen, Kacina, Marta, Freddie, Ryan, Nigel, Aletheia, Takeya, Adrian, and JR; twelve great-grandchildren and two great-great grandchildren; a host of nieces, nephews, relatives and special friends Lola Jones and Penny Cox; and her Caregivers Mary Jane McCullor and Lynette Blunt.

The family of Mrs. Neta Mae Blount created this Life Tributes page to make it easy to share your memories.

Send flowers to the Blount family.