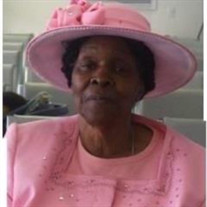 Sunrise: On July 6, 1928, heaven touched the earth and a girl child was born as God blessed the earth with the presence of Naomi Best. She was born to the late Major and Pearlie Best as she held a special place in the heart of her family. Mother... View Obituary & Service Information

The family of Mrs. Naomi Parker created this Life Tributes page to make it easy to share your memories.

Send flowers to the Parker family.