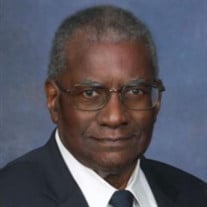 Milton Jenkins, Jr. was born on December 28, 1935 in Greenville, NC to the late Milton and Ada Thomas Jenkins. He departed this life peacefully on Monday, March 22, 2021 at Vidant Medical Center in the loving presence of his wife, Rachel. Milton was a graduate of C.M. Eppes High School. He attended Pitt Technical Institute, now Pitt Community College, where he studied to become an electronics technician. He worked for Hollowell Drug Store for 15 years and was later employed by Sears as an electronics repair technician. Milton retired from Sears after 34 years of service, and throughout those years he received numerous awards for being a dedicated employee. When he was 20 years old, Milton became a member of St. Gabriel Catholic Church, and that membership was the beginning of a lifelong pious, fruitful, and dedicated relationship with the Lord. He participated in numerous church ministries: AAMEN (African Ancestry Ministry and Evangelization), Altar Server, Confirmation Sponsor, Eucharistic Minister, Hospitality, Knights of Columbus, Legion of Mary, Nocturnal Adoration Society, and Parish Council. In 2011, Milton received the Benemerenti Medal from Pope Benedict XVI. The medal is given to recognize recipients for their service to the Catholic Church. Throughout the years, he received many other commendations which included certificates, plaques, ribbons, and lapel pins. In 2015, Milton was featured in an interview in the Diocese of Raleigh’s publication, NC Catholics. In the article he recounted his faith journey as a member of the St. Gabriel parish. He shared that he read and studied the Scriptures and other spiritual resources because they enlightened him and allowed him to continually learn about his faith. Milton had a variety of electronic special interests, two of which were building televisions and radios. He was ahead of his time because long before the boom of Apple, Dell, and the many others that later came into prominence, he built his own computer. When once asked the name of his computer, the talented technician replied, “It has many names.” As a result of obtaining a Ham Radio Operator license, learning Morse Code, and building his own radio tower, Milton was able to converse with people all around the world. Even after retiring, his love for his vocation as an electronics technician made it possible for him to help friends and others whenever they had an appliance, TV, or radio in need of repair. Other favorite pastimes of Milton included: going fishing on his favorite day, Saturday; photography - he often developed his own pictures; working in his yard; and watching old Westerns. In addition to his parents, Milton was preceded in death by his brother Roosevelt Jenkins; and sister, Mildred Jenkins Whichard. He is survived by his wife of 50 years, Rachel Barnhill Jenkins; brother, John Henry Jenkins (Grace) of California; sisters, Joyce Jenkins of Greenville, NC, and Ruby Jenkins of Washington, DC; nieces, nephews, and other relatives and friends.

Milton Jenkins, Jr. was born on December 28, 1935 in Greenville, NC to the late Milton and Ada Thomas Jenkins. He departed this life peacefully on Monday, March 22, 2021 at Vidant Medical Center in the loving presence of his wife, Rachel. Milton... View Obituary & Service Information

The family of Mr. Milton Jenkins created this Life Tributes page to make it easy to share your memories.

Send flowers to the Jenkins family.