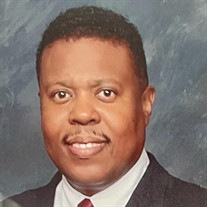 Death is the golden key that opens the door to eternity. On February 4, 2021, the key was turned, and eternity was opened to Michael Lambert Brown. So, by the hand of the Almighty God according to divine appointment with the call of death, this family meets to say goodnight to a loved one. Michael was born September 10, 1964 in Brooklyn, New York to Pauline and the late Hildred Brown. He attended public schools in New York and Pitt County, North Carolina. Michael was very active in school. His activities included the Boy Scouts of America, marching band and he also played baseball and basketball. He was President of the Student Body at North Pitt High School. The summer before his senior year of high school, he was one of a few gifted and talented high school seniors chosen to attend the prestigious North Carolina Governor’s School summer residential program in High Point, North Carolina. He continued his education at North Carolina State University in Raleigh, North Carolina, where he earned a Bachelor of Science Degree in Electrical Engineering. He began his career as an Electrical Engineer with CP&L (Carolina Power and Light Company). He then worked at Duke Power in Charlotte, NC. Upon relocating to the state of Maryland, he gained employment as an electrical engineer at PEPCO in Rockville, Maryland. During his 29 years of employment, he had several roles of varying and increasing responsibilities across the company. He treasured his most recent role in management where he was able to utilize his technical expertise and lead engineering teams. Michael was a member of St. Mary Church of Christ in New York. After relocating to North Carolina, he joined Medley Chapel CME Church in Bethel, North Carolina. He was a member of the choir and attended Sunday School. Later he became a member of Cornerstone Missionary Baptist Church in Greenville, North Carolina. His love for his immediate and extended family was very evident. He spent his free time visiting family in North Carolina, Maryland, Virginia, New York and Georgia. He showed remarkable interest and dedication to the Lowe Family. He served as their respected National Chairperson for the Annual Lowe Family Reunions for several years. Michael leaves to cherish his memory, a wife, Donna Primrose-Brown; daughter, Michaela Brown; mother, Pauline C. Brown of Greenville, NC; one sister, Monica Brown of Greenville, NC; two brothers, Keith Brown (Monique) Northville, Michigan, Craig Brown of Greenville, NC; mother-in-law, Gayle Primrose of Beltsville, Maryland; father-in-law, Philip Primrose (Iris) of Clinton, Maryland; one, sister-in-law, Dorothy Primrose of Silver Spring, Maryland; one aunt, Alberta Brown of Wake Forest, NC; two uncles, Russell Carney of Indianapolis, Indiana and Wheeler Brown (Barbara) of Greenville, NC; two nieces, Kayleigh and Khloe Brown; two nephews, Ian and Aaron whom he loved dearly, and a host of cousins, other relatives and friends.

Death is the golden key that opens the door to eternity. On February 4, 2021, the key was turned, and eternity was opened to Michael Lambert Brown. So, by the hand of the Almighty God according to divine appointment with the call of death, this... View Obituary & Service Information

The family of Mr. Michael Lambert Brown created this Life Tributes page to make it easy to share your memories.

Death is the golden key that opens the door to eternity. On February...