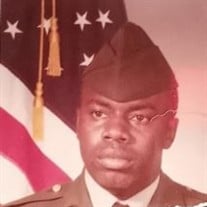 Maurice Dixon was born August 19, 1961 in Williamston, NC. God called him to his eternal rest on Tuesday, December 15, 2020. Maurice graduated from Williamston High School in 1981. He was a proud U.S. Army veteran. He enlisted shortly after High School and was stationed in Ft Riley Kansas and Ft Bragg NC. Maurice loved serving his country and had many Army stories to share with his family and friends. After departure from the Military, Maurice managed restaurants in North Carolina and New York until his health failed. Maurice was a joyful and generous young man. He had the biggest laugh and smile. He could tell a story; everybody would take him seriously, then he would tell you in the biggest laugh that he was just kidding. But when Maurice was serious, he was steadfast in his beliefs and nobody could change his mind. He would defend his point of view unapologetically. That was our “Maurice” who we all loved dearly. As a young man he loved dancing and singing to the songs of The Temptations and Al Green. He was a fun-loving person. Maurice fell in love and married Savetra Purvis in 1982. To this union came two wonderful daughters, Brontika and Meisha whom Maurice loved with all his heart. Brontika displayed that same love for her daddy, relocating from California to North Carolina just to make sure her daddy was well taken care of. When you were in their presence, you could hear “I love you” over and over and over. They never hesitated to openly express their love for each other. Sweet little Meisha went to be with Jesus in 1990 at the age of 5. Although Maurice and Savetra divorced, they remained good friends and enjoyed parenting their precious daughters. Maurice accepted Christ at any early age and joined True Way Holiness Church under the leadership of Pastor Marie Brown and later Pastors Ronnell and Harriet Rodgers. Maurice could play the piano and sing the songs of Zion. Maurice was a loving son who always had his mother’s wellbeing at heart. When his health allowed, he made numerous visits to NY to check on his ailing mother. When he could no longer make the visits to NY, he brought his mother to Raleigh to live with him so he could monitor her more closely. Even though he was sick, he became her caretaker. He accompanied her to almost every doctor appointment, took her shopping, prepared her foods, and did everything he could do to make sure his mother got the best care, was comfortable and happy. He nursed and loved her back to health to the point where she was able to take care of him whenever he had a health crisis. Maurice was generous in love and substance. He was always willing to share and give. He blessed many family members and friends, knowing that he most likely would not be repaid. Maurice loved his pets. Taking care of his four turtles (Princes, Tweetie, Bennie and Mickey) brought him so much peace and relaxation. We believe even they know he’s gone because he gave them so much love and attention. Maurice was preceded in death by his baby girl, Meisha. Maurice leaves so many who will cherish his memories, mother, Frances Dixon Lawton; daughter, Brontika Dixon; brother, Waddell Dixon (Tina); uncle, Mckinley Dixon; aunts, Loretta Dixon, Dorothy Rawls, and Peggy Dixon Jamison; a host of nephews, cousins and friends who will miss him dearly. Oh Maurice, we all loved you so much. We’re going to miss you so much. Our hearts will ache for days to come. We wish you could have stayed with us longer, but we do acknowledge and honor the sovereignty of God, knowing He is too wise to ever make a mistake. Sleep in heavenly peace, Beloved. Sleep in heavenly peace.

Maurice Dixon was born August 19, 1961 in Williamston, NC. God called him to his eternal rest on Tuesday, December 15, 2020. Maurice graduated from Williamston High School in 1981. He was a proud U.S. Army veteran. He enlisted shortly after... View Obituary & Service Information

The family of Mr. Maurice Dixon created this Life Tributes page to make it easy to share your memories.

Send flowers to the Dixon family.