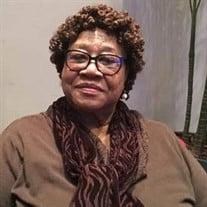 Martha’s Story Mrs. Martha B. Perkins was born, one of twelve children, to the late Willie & Sarah Barrett, on September 8, 1932. She was joined in holy matrimony to the late George Perkins, Jr. of Pitt County. To this union, nine children were born. On Wednesday, April 8, 2020, Mrs. Martha transitioned from this life to be with the Lord. Mrs. Martha grew up in Pitt County and attended Jones School, she was a devoted employee of Carolina Leaf and Greenville Marble. She was selfless and found joy and purpose in caring and being generous to others. She was full of love, easily approachable, and very personable; she never met a stranger. She was the rock of her family and was a surrogate to many children and grandchildren. Everyone had a special place in her heart. Mrs. Martha was also a disciplinarian. She carried a paddle, affectionately named, “Mr. Good Bar” and she could give you a serious “momma look” without saying a word and everyone knew exactly what it meant. Mrs. Martha loved to travel, go to the gym, and had a passion for cooking. A few of her signature dishes were collards greens with dumplings, Eastern Carolina style barbecue, and her grated sweet potato pudding. The last grated sweet potato pudding she made was for Pastor Corbett, who became her son. Mrs. Martha would feed you, listen to your concerns, and told great stories from her past. Her laughter was infectious and warmed many hearts. Mrs. Martha was a member of Greenville Community Christian Church, where she faithfully attended until her health declined. She could be seen smiling with joy and gladness as she listened to the preaching and worshipped. She oftentimes quoted Philippians 4:13 “I can do all things through Christ which strengtheneth me.” Mrs. Martha was preceded in death by her husband, George Perkins, Jr; nine siblings, Nancy Little, Carolyn Dudley, Willie Barrett, Peyton “Boy” Barrett, James Barrett, Samuel Barrett, Charlie Barrett, Corris Barrett; two sons-in-law, Curtis Pearson and Herbert Filmore. Mrs. Martha leaves to cherish her memories, one brother, Johnny Morris Barrett; two sisters, Mary Perkins (her twin) of Orange, NJ and Alice Carter of Winterville, NC; two sons, Clarence Perkins of Kinston, NC, Bobby Perkins (Geraldine Perkins) of Greenville, NC; seven daughters, Marjorie Pearson, Essie Filmore, Sarah A. Corbett (Pastor James D. Corbett) and Alice Perkins all of Greenville, NC, Martha Taylor of Winterville, NC, Lena Perkins-Lane, and Edith Perkins of Greenville, NC; twenty-six grandchildren; thirty great-grandchildren; nine great-great-grandchildren; a special friend, Ms. Corrina Howard; a host of nieces, nephews who were dear to her heart, other relatives, and friends. Grandma, you are… The Wind beneath my wings, The Hope that kept me going. The Drive that pushed my feet, The Love that warmed my heart. The Light that lit my path, The Joy through all my sorrow. The Ear that always heard, The Voice that spoke great wisdom. The Food for my belly, The Cup that we all drank from! The Laugh that kept me smiling, The Friend during hard times… Now, you are my Angel that keeps me Safe! We love you, Grandma, The Grandchildren.

Martha&#8217;s Story Mrs. Martha B. Perkins was born, one of twelve children, to the late Willie & Sarah Barrett, on September 8, 1932. She was joined in holy matrimony to the late George Perkins, Jr. of Pitt County.... View Obituary & Service Information

The family of Mrs. Martha Perkins created this Life Tributes page to make it easy to share your memories.

Mrs. Martha B. Perkins was born, one of twelve...

Send flowers to the Perkins family.