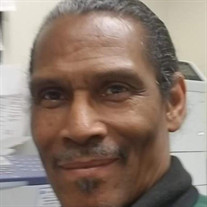 On Friday, December 17th, 2021, services for Mr. Barnes will be held at Columbia Community Church, 8516 Thomas Williams Way, Columbia, MD 21045, where the family will receive friends from 10:30 – 11:00 AM with services to follow. Local Services will take place on Saturday, December 18, 2021 at 12:00 pm at St. John Missionary Baptist Church Soul Saving Center, Stokes, NC. Mr. Marion Terris Barnes, of Silver Spring, MD, transitioned on Sunday, November 28th, 2021, in Columbia, MD. Mr. Barnes was born on December 25th, 1957 in Bethel, North Carolina. Marion Terris Barnes was first and foremost a Christ-child who loved the Lord and was a member of the Columbia Community Church in Columbia, MD for more than a decade. He was born in Bethel, North Carolina on Christmas Day 1957, the only son of Alma Ree and Marion Davis Barnes and grew up on a 44-acre farm in Greenville surrounded by family and faith. He graduated from North Pitt High School where he was an all-around athlete who wrestled, played football, and ran track. He also served as a school bus driver. He attended East Carolina University and joined the Omega Psi Phi fraternity ECU chapter before enlisting in the United States Air Force in 1977 to become, first, an operating room technician, then a surgical assistant and, ultimately, a registered nurse (R.N.) first surgical assistant. A veteran of the Air Force, Air National Guard, and Army National Guard, Marion moved to Maryland in the mid-1980s and became an R.N. in 1991. Always calm in a crisis, Marion excelled as an R.N. for 30 years, working in the Emergency Room, Intensive Care Unit, and many other departments, lastly, as a Post Anesthesia Care Unit nurse. Ruggedly handsome, blessed with Southern charm, and a friend to all, Marion was a devoted father, husband, brother, and grandfather. He was especially close to his younger sister, Cynthia, who he spoke with almost daily on his way to work and his daughter, Gabrielle, who was the joy of his life. An ardent Los Angeles Rams football and North Carolina Tarheels basketball fan, Marion enjoyed woodworking; watching Star Trek: The Next Generation and Formula 1 racing; drinking strong coffee and Pepsi; and eating North Carolina BBQ sandwiches, peanuts, and large bowls of vanilla ice cream on nights he wasn't working at the hospital. He loved driving his 1997 Land Cruiser through rain, snow, and dark of night; breakfasts at the Waffle House; and feeding the birds and deer behind the Silver Spring, MD townhome he shared with his wife of more than a decade, Elisse, whose success as a mid-life entrepreneur both delighted and amazed him. Marion was an enthusiastic world traveler, photographer, and hiker who treasured memories from family trips to Canada, Alaska, Costa Rica, the Grand Canyon, Yosemite and Yellowstone National Parks, Bar Harbor, Martha's Vineyard, Spain, and Jamaica. One of his favorite trips was driving the entire Pacific Coast Highway from Seattle to San Diego with Elisse by his side. Together, they waged a fierce seven-year battle with lymphoma that ended when Marion passed away on Sunday, November 28, 2021, in Columbia, MD, at the age of 63. He is mourned by his wife, Elisse; his beloved daughter, Gabrielle (Daniel) and three beautiful children, McKenna, Raiden, and Adonis; sister, Cynthia Barnes; adopted sister, Mary Frye, and countless cousins, aunts, uncles, extended family, friends, co-workers, and neighbors who will continue to love and miss him until they meet him again at the feet of Jesus. In lieu of flowers, donations in Marion's name can be made to the Leukemia & Lymphoma Society at lls.org and Hope Connections for Cancer Support at https://hopeconnectionsforcancer.org/.

The family of Mr. Marion Barnes created this Life Tributes page to make it easy to share your memories.

Send flowers to the Barnes family.