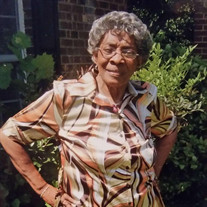 On Monday, April 20, 2020, Maggie Mae Credle Spencer was called home at the age of 89. Maggie was born on January 12, 1931 in Hyde County, NC to the late Grace Jennette and Respree Spencer. She attended school in Swan Quarter and later relocated... View Obituary & Service Information

The family of Mrs. Maggie Spencer created this Life Tributes page to make it easy to share your memories.

Send flowers to the Spencer family.