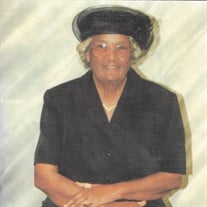 Mother Maggie Slade Grimes on Monday, January 31, 2022 God sent his best angels to escort Mother Maggie Slade Grimes to her heavenly home. Mother Grimes’ transition was peaceful from this world to her final resting place. In her final days Mother Grimes continued to say no matter what the Doctor’s said, she would say it is ALL IN GOD’S PLAN. Mother Maggie Grimes was born on January 2, 1928 to the late Noah and Mollie Askew Slade in Martin County. Mother Grimes has now closed her generation’s chapter as the final child to her parents. Mother Grimes was a member of Christian Chapel Church in Parmele, NC where she served faithful as a Mother in the church. She was a prayer warrior in and out of the church. She was always willing and ready to offer a word of prayer to everyone she met. She loved her church family. Giving the Lord a praise is what she would do. Mother Grimes met and married Mr. Claude Grimes and they lived in the Township of Bethel during their years of marriage. They lived at the corner of Barnhill Street for more than 60 years. Everyone knew who lived on that corner and the children in the neighborhood would stop and visit with Mother Grimes even when they had grown up, moved away and returned home on special occasions. There was always laughter and enjoyment for her as her children as she called them, visited with her on the corner, on the porch. They never had to wonder if she knew who they were, because she never forgot any one of them. She call them by their name and could tell them who their entire family was by name. What a memory she was blessed with right until the end. Mother Grimes was preceded in death by her husband Mr. Claude Grimes; her siblings, Samuel, Alfonso, David Slade, Alice Daniels, Florida Daniels, Ondris Crandell and Mary Brown. Mother Grimes leaves to cherish her memories, Russ Andrews (Christie) &, Kathyrn Thompson (Mark), Joan Holder (Lee) whom she loved and cared for as her own; her devoted niece, Lois Daniels; her special great niece, Tara Brewster of Atlanta, GA; her personal chauffeur, Barbara Highsmith and a longtime friend, Mrs. Gladys Andrews both of Bethel, NC; a host of nieces, nephews, cousins, relatives and friends. Mother Grimes will be remembered as a great cook, for her beautiful flower gardens, and love for Christmas and as someone who was always willing to lend a helping hand to every child that she met. SHE LOVED LIFE AND LIVED IT FULLY TO THE END. I have fought a good fight, I have finished my course, I have kept the faith: II Timothy 4:7 KJV

Click the link to watch the live streaming service for Mother Grimes https://fb.watch/a-NTGxNcvp/