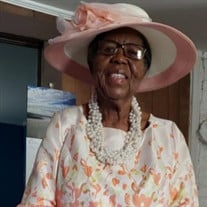 Fight the good fight of the faith. Take hold of the eternal life to which you were called and about which you made the good confession in the presence of many witnesses. 1 Timothy 6:12 Mother Mae Bell Williams Mattocks “Mrs. Mae Bell” gained her wings on Saturday, September 4, 2021 at Vidant Beaufort Hospital in Washington, NC. Although her sudden illness and passing has left an unimaginable void, we are comforted by her legacy of love, faith, and family. On December 24, 1933 at 3:00 pm. Mother Mattockss made her grand entrance born to the late Lem Williams and Sucfronia Hemby Williams on what her parents came to say was the best Christmas Eve they ever had. Mother Mattocks came to know and accept the Lord at an early age and joined Holy Temple Ministries at age of 9. As she would often express, Holy Temple was where she joined and where she stayed. She loved working in the finance room and as she aged, she enjoyed working with the young women who now lead the way into the next generation. She loved her church, her church family and was never happier than when she was able to worship and testify about all that God had done for her. Through the years she held roles such as usher and, eventually became the Finance Treasurer. However, her greatest honor was when she was bestowed with the role of a Church Mother as she gave her all to represent stability and godly reverence to her faith. Mother Mattocks attended Beaufort County Schools and for many years she took care of children in her home. Along with her husband, the late Gerald Bernard Mattocks, Sr. they cared for scores of children who came to love them. If you were cared for by them, you became family forever. She enjoyed when they would call or come by to visit. Someone asked her how many children she took care of and she didn’t know the number, but she knew that there were many. Throughout her life, she never saw a baby that she didn’t think was beautiful. She was very much a mother figure to all she nurtured and loved. Mother Mattocks loved to dress in her fancy suits and hats. She loved hats and she was blessed to have many. On a family trip to Maryland, she once entered a hat shop that contained nothing but hats of all shapes, colors and sizes. She was like a kid in a candy store because it was hard to choose one. However, she finally did, but that memory was one that her family will remember and laugh about for years to come. Aside from hats. Mother Mattocks was known for her Jelly Cake recipe, homemade biscuits, sweet potato pies and never cooking bad collards and rutabagas. Often asked, she would say she had been cooking since she was 9 years old because her mother was in bad health and she and her daddy had to eat. Through the years, she cooked and passed on cooking tips to not only her daughters, but to her sons as well. She took great pride in saying that “no woman could starve her grandsons because every one of them could cook”. As destiny would have it, Mother Mattocks met and married the love of her life Gerald Bernard Mattocks Sr. They lived a long, happy, devoted life together and raised 5 children in addition to many others until his death on February 9, 2002. She was also preceded in death by one daughter, Dr. Carolyn Regennia Mattocks, her parents and other relatives and in laws. Mother Mattocks was always big on family, so we know she is excited to be with many who went home before her. We find solace and peace in knowing her earthly struggles are over. She is healed, she is whole, and she suffers no more. Mother Mattockss leaves to continue her beautiful legacy three sons, Ronald C. Williams, Sr. (Sharon) of Edward, NC, Gerald B. Mattocks Jr. (Sandra) of Essex, Maryland, and Micheal Mattocks (Karen) of Columbia, SC; a daughter, Anniette Mattocks Keyes (Ray) of Washington, NC; grandsons, Pastor Ronald C. Williams, Jr (Tresha), Terrence Pettiford (Tennille), Brad Jones, Taron Mattocks, Damien Mattocks, Asim Mattocks and Kalen Mattocks, granddaughters, Mileka Mattocks Marshall (Taurean), Kara Mattocks Hickmon (Edward), 11 great grandchildren; Aunt, Mrs. Evelyn Hemby; two brothers in law, John Mattocks (Miriam) and Walter Mattocks (Lois); sister in law, Elder Eula Mattocks (Earl) and a host of many loving and devoted first cousins who were more like brothers and sisters than cousins and her many loved surrogate children, grandchildren, great and great great grands she helped rear along the way. Mother Mattocks will always be remembered as a kind, loving and gentle soul to all who got to meet and know her. Her children rise up and call her blessed; her husband also, and he praises her. Many women do noble things, but you surpass them all….Proverbs 31:28-29

Fight the good fight of the faith. Take hold of the eternal life to which you were called and about which you made the good confession in the presence of many witnesses. 1 Timothy 6:12 Mother Mae Bell Williams Mattocks &#8220;Mrs. Mae Bell&#8221;... View Obituary & Service Information

The family of Mother Mae Bell Mattocks created this Life Tributes page to make it easy to share your memories.

Fight the good fight of the faith. Take hold of the eternal life...

Send flowers to the Mattocks family.