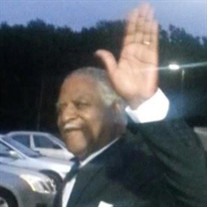 Though he slay me, yet will I trust in him. Job 13:15 He, whose name was Lyman Lewis Teele, was born on January 5, 1947, in Pitt County, NC. He was the youngest child of John Richard Teele and Bessie White Teele. He was born in Simpson, NC, and spent his early years in the surrounding areas including Grimesland, Washington, and Chocowinity. He attended GR Whitfield school until the end of the 10th grade when he moved to Greenville, NC because of his father’s health. He still had fond memories of the times and teachers at GR Whitfield. Upon moving to Greenville, he attended C.M. Eppes High School and graduated with the class of 1966. He and those classmates remained the best of friends. After graduating, he joined the United States Army and served two tours in Vietnam before returning home to Greenville. He worked many jobs in his quest to help take care of his Mother and later his family. In 1971, he met a young lady named Sylvia Ann Snead who would later become his wife. He worked hard to become a good provider and father for his family which now includes three daughters and a niece that they cared for as their own. Through the years he worked for McKenzie Security and Budd Services in different security assignments all while serving in the 514th Military Police National Guard Unit located in Greenville, NC. He served that unit for over 20 years traveling to the California desert, the Philippines, Egypt, and many more stateside locations. In 1991, when the Unit was called to Germany; he made the hard decision to leave the 514th MP Unit because his daughters begged him not to leave them. Soon after leaving the Unit he became employed at ECU Brody School of Medicine where he later retired. To know him was to love him. He never left home without sporting one of his many Vietnam Veteran hats. Lyman was a man of many words and if you knew him you know he did not mind using them. He never met a stranger and loved to talk. His grandchildren and nephews have been laughing for years at the joke about the smartest man in the world. Some of his greatest saying were “I’m doing all right for an old man”, “I’ll be your lollipop but not your all-day sucker” “Common sense isn’t common to everybody”, “Avery sugar sugar”, “love is a misunderstanding between two fools.”, “I taught her everything she knows” “Justa ugly” “excuse my French” “a hundred years from now it won’t make a bit of difference” “this too shall pass.” No matter how many times we said I love you his reply was always “I love you more”. He was a faithful and dedicated member of York Memorial AME Zion Church where he served as a Trustee for several pastors and Chair for several years. He was well-known figure in the North Carolina Conference. He was a supportive husband, faithful member, and a step-in standup guy. He supported his wife in her Pastoral assignments at Keyesville AME Zion Church, Washington, NC, and most recently at Cannon Temple AME Zion church in Edenton, NC. He touched everyone he encountered with his friendly and supportive demeanor. If anyone asked about Lyman everyone would say he was just an all-around good guy. Lyman departed this life during his favorite time of year early Thursday, November 26, 2020 on Thanksgiving morning God answered Lyman’s request to sleep away. He was preceded in death by both his parents; his brothers, Steven Teel, Morris Teele, Bill Teel, James Teel; his sisters, Carrie Teel, Barbara Ann Teel, Edna Turnage; his cousin, Eddie Dean Morris. He leaves to cherish fond memories with his wife and companion of 49 years, Sylvia Ann Snead Teele; his girls, Alysia Teele, Nikki Teele, Lymanda Brewington (William) all of Greenville, NC, Tonya Dixon of Raleigh, NC; his grandchildren, Anthony Rayshad Grimes, Teonte’ Douglas, Ja’Nique Strong, Elijah Teele, Nakiya Carmichael, Davia Teele, Javonte’ Amir Strong, all of Greenville, NC; brothers and sister in law, Leroy Hubbard, Joseph Briggs (Theresa), and Shonda Hubbard, all of Greenville, NC; devoted family members, Gregory Morris, of Atlanta, GA, Dionne Johnson of Richmond, VA, and James Jones (Bossman) of Greenville, NC; God-sisters, Wyna Roulach of Grimesland, NC, Lucille Sayles of Greenville, NC, Joyce Karr of Raleigh, NC; God-brothers, Charles Gorham, Charles Smith and Marvin Smith (Belinda); special friends, James Anderson, James Parker, Pokey Jackson, Willie Blount, Melvin McLawhorn, the CM Eppes Class of ‘66, Blaney Parker, and Cliff Vereen, who he was friends with since Vietnam; host of nieces, nephews, relatives and friends. If we ever needed to find him, we could find him in Walmart or Harris Barbershop with Carl Harris and the guys. His love and friendly spirit will be missed by many

Though he slay me, yet will I trust in him. Job 13:15 He, whose name was Lyman Lewis Teele, was born on January 5, 1947, in Pitt County, NC. He was the youngest child of John Richard Teele and Bessie White Teele. He was born in Simpson, NC,... View Obituary & Service Information

The family of Mr. Lyman Lewis Teele created this Life Tributes page to make it easy to share your memories.

Send flowers to the Teele family.