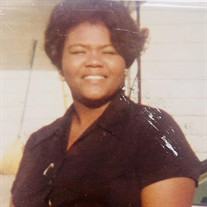 Lula Lee Little Cherry entered eternal rest on October 4, 2021 at 6:45 a.m. at the Edgecombe Health and Rehabilitation Center in Tarboro, NC of natural causes. She grew up and lived in Robersonville, NC all of her beautiful life. She graduated from the Martin County Schools systems in 1972. Throughout her years in school, she received Honor Roll, Perfect Attendance, and Penmanship Awards. After high school she had an opportunity to go to Virginia Tech to study Information Technology (IT) on a scholarship. However, life had another turn; she began working at different garment industries as a seamstress. Sometime later, in 1987 she was filmed as an extra in the movie called “Summer Heat” that was filmed in Robersonville, NC, pushing a stroller. She had an interest in supporting the community such as Head Start, Parent-Teacher Association, community events, the Elk’s Lodge, and the Order of the Eastern Star where she served as the Treasurer. She had a giving spirit. She donated to many charities which included the American Cancer Society (she is a cancer survivor), St. Jude’s Children's Hospital, Eastern Seals of NC, Disabled Veterans National Foundation, and The Boys Town. She donated to different food pantries right here in your community. In her past time, she loved watching the EastEnders, Midtown Murders, As time goes by, Young and the Restless, Bold and the Beautiful, and the News. She thought that she was a British Queen. One special show that she is known as Dorothy is the “Golden Girls.” She is definitely a Golden Girl as she gave her life to Christ at an early age. She attended St. Mark Disciple of Christ in Everetts, NC under the leadership of the late Bishop A. E. Brooks and currently Pastor A. Bradley. There she served in the kitchen, choir, trustee, and other duties in the church. She paid her tithes and love offerings faithfully. Her favorite scripture was Psalm 107. If you didn’t know, she was passionate about the color purple, butterflies, plants, and her favorite flower was the Calla Lily. Lula AKA Lulee was born on September 19, 1954 to the late LaFayette “Fate” Little and Alberta Williams Little in Pitt County. The Queen is survived by her spouse, Walter E. Cherry of the home. Three beautiful children, Tara Little and family of Raleigh, NC, Lieutenant Colonel Blake Little, Sr. and family of Oxen Hill, MD, and Janique Little-Boyce, M.Ed. and family of Kannapolis, NC; she has a bonus son, Scotty Washington and family of Greenville, NC; in addition, her godson, Linwood Campbell, Jr. of Robersonville, NC. There are other godchildren and god grandchildren. She adored her sisters, Deborah Leathers of Williamston, NC, Alice Latham of Washington, NC, the late Mary Ann Little; one sister-in-law, Evelyn Mims of Richmond, VA; one great-great, Aunt Annie Louise Cobb of Williamston, NC; she had many adopted brothers and sisters; she loved her eight grandchildren and six great-grandchildren; a very close relationship with her nieces, great nieces, adopted nieces, nephews, great nephews, and adopted nephews. She cherished all of her family and friends.

Lula Lee Little Cherry entered eternal rest on October 4, 2021 at 6:45 a.m. at the Edgecombe Health and Rehabilitation Center in Tarboro, NC of natural causes. She grew up and lived in Robersonville, NC all of her beautiful life. She graduated... View Obituary & Service Information

The family of Mrs. Lula Cherry created this Life Tributes page to make it easy to share your memories.

Send flowers to the Cherry family.