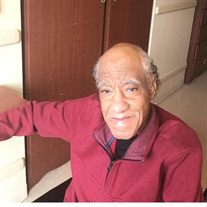 Linwood Bross Moore, Jr. 73 of Edward, NC passed away peacefully at Vidant Medical Center on Wednesday, May 29, 2019. He was surrounded and supported by his loving family and caregivers during the last days of his life. Born September 15, 1945, in Aurora, NC. Linwood is the son and the first child of the late Linwood Bross Moore, Sr. and Alvania Battle Moore. Obituary He graduated from S.W. Snowden High School, class of 1963. Linwood started his career at Texas Gulf, now Nutrien Aurora Phosphate, where he worked for eight years. He worked at Hardison Tire Co in Bayboro NC., for many years, before being employed at Piggly Wiggly as a Produce Manager. He then later worked at Veri Kwik as a cook in Edward NC for numerous years before retiring. Linwood was a faithful member of St. Luke Missionary Baptist Church in Edward, NC. He became a member at an early age. Linwood was a lifelong avid horse lover, and during his younger years, he was a car enthusiast. Some of you may remember he had one of the most admired cars in town during the ’70s. “The bright yellow Plymouth Road Runner”, It was always kept impeccably clean. Linwood also was known to kick up a little dust, as road runners do, participating in a few Saturday night drag races, where he and his brothers would rule the road. He continued to ride and train horses for over 32 years. His favorite horses were Big Red and Buck. Buck was his last horse up until his health declined. Linwood’s life and memories are survived and loved by his children and grandchildren. Three daughters and (spouse): Detra F. Williams (Willie), Angela Moore of Alexandria, VA, and Tamara Benefield. One son Linwood Brandon Moore; five grandchildren: Kristiana J. and Kimora L. Moore of Alexandria, VA; Sidney, Carrington, and Greyson Blount. One great-granddaughter: Avery Blount. Two brothers: Cornelius Moore of Upper Marlboro, MD and Darryl Moore (Freddie) of Fort Worth, TX. A Special Uncle Roosevelt Hill of Washington, NC and a Special Aunt Linnie Battle of Aurora, NC. He is also cherished and loved by nieces, nephews, cousins, in-laws, and a Special Friend Jimmy Walker and family of Edward, NC

Linwood Bross Moore, Jr. 73 of Edward, NC passed away peacefully at Vidant Medical Center on Wednesday, May 29, 2019. He was surrounded and supported by his loving family and caregivers during the last days of his life. Born September 15, 1945,... View Obituary & Service Information

The family of Mr. Linwood Bross Moore, Jr. created this Life Tributes page to make it easy to share your memories.

Send flowers to the Moore, family.